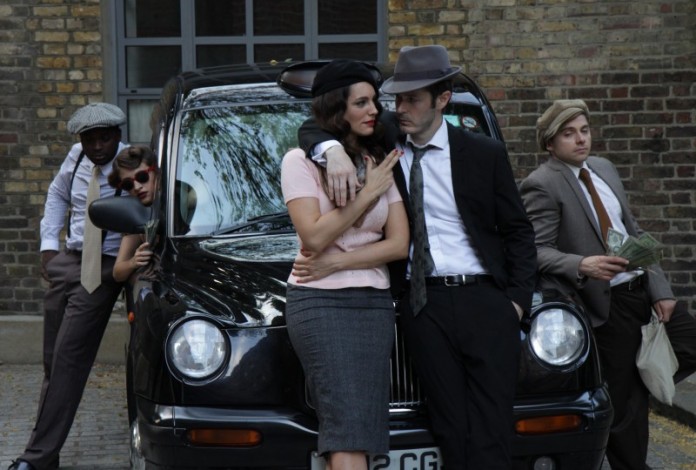 When settling in to watch Maeve Murphy’s third feature length film Taking Stock, you soon realise this is not an instance where it’s fair to be particularly disparaging, or overtly judgemental, given how modest sized a budget is behind this undemanding endeavour. But having limited resources should become an instant excuse for a film’s shortcomings. Rob Brown’s distinguished debut Sixteen was made on very little, but was still trying to say something, it had a point and a message. We should always be encouraging filmmakers to take the daunting leap and make movies, no matter how shoestring a budget they’re working on, but at the same time, you can’t help but wish for more depth and nuance – which is exactly where Taking Stock falls short.

Kelly Brook plays Kate, who discovers, alongside her colleagues Kelly (Georgia Groome) and Nick (Jay Brown) that they are to be made redundant, following the forthcoming closure of the retail shop they work in. With little remorse shown by their boss Mat (Scot Williams) nor from the owner Christina (Lorna Brown), Kate decides to follow in the footsteps of her idol Bonnie Parker (one half of Bonnie and Clyde) and tap into her inner criminal, wanting to steal the money from the shop’s safe, to pay herself a redundancy package that she feels is rightfully hers.

This picture thrives in frivolity, as a playful piece that doesn’t take itself at all seriously, which is vital. There”s a bouncy tone, and a vibrancy, especially in the colourful aesthetic, which aids the surrealistic elements of the narrative and gives Murphy more licence to steer away from naturalism – a licence she most certainly takes up. Though the editing is somewhat shoddy to say the least, the setting compliments the title well, shot on location in Kings’s Cross, giving the audience a flavour of London in the Summer.

Though this feature is from the female perspective, it does appear to be shot in the male gaze, but in a way that is empowering to the protagonist who is confident and beguiling. She’s endearing flawed though, clumsy and inept at times – and though vying to be like the ineffably cool Bonnie Parker, she is humanised by her imperfections, relatable in how she manages to always get things ever so slightly wrong, whether that’s failing to start the car during a potential chase, or stepping in dog poo. Like she says herself, she’s not very good at being bad. Brook turns in a satisfying display, but not one that will blow you away. Accomplished enough, but perhaps lacking in any sense of subtlety which would be beneficial to a character who features in almost every single scene.

On a more negative note, the film’s attempts at humour fail miserably, and you certainly don’t need a lot of money to come up with a relatively funny joke. That side of things is inexcusable, you can have all the heart you want, but a comedy lives or dies on its ability to evoke laugher and this barely scratches the surface in that department. Thankfully, though, this does have heart, and while undoubtedly flawed, Taking Stock isn’t trying to be anything its not.

HeyUGuys on Set: We go on location for British comedy/horror Double Date