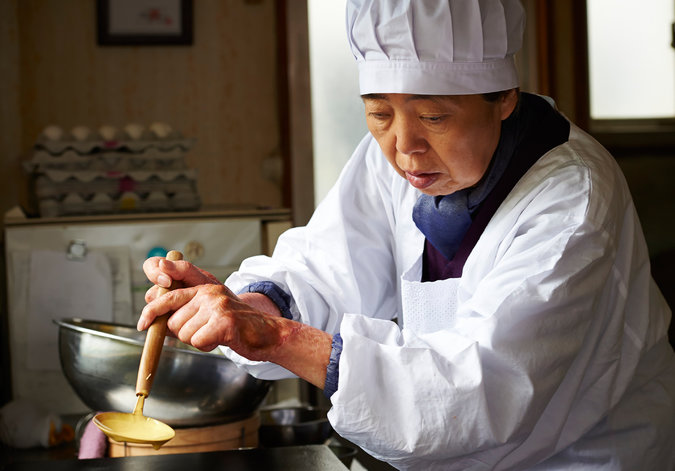 Prolific Japanese auteur Naomi Kawase has formed a remarkable career for herself in film with a distinct focus on those culturally neglected, autobiographic in her distinctively naturalistic approach, telling intimate stories of family, and in particular, the matriarchal presence within them. Her latest endeavour Sweet Bean remains perfectly in tune with her sensibilities as a filmmaker, evidently tapping into a dynamic comparable to how she was raised, by her great-aunt, while putting the focus on an elderly woman with leprosy – a community ostracised across decades in Japan.

The aforementioned role is that of Tokue (Kirin Kiki), who stumbles across the compact pancake stall run by the beleaguered Sentaro (Masatoshi Nagase), asking, persistently, for a job. Given she’s in her mid-late 70s, and suffers from leprosy which has disfigured her hands, Sentaro is reluctant to adhere to her wishes, and sends Tokue on her way – but then she returns with her own home-made bean recipe, a vital ingredient in crating the stall’s primary seller, the dorayaki. Sentaro has never tasted a paste like it, and hires Tokue immediately to help create this wondrous jelly, and while customers flock, including the regular local Wakana (Kyara Uchida), the pair strike up a bond that transcends that of a boss and an employee, enriching one another’s lives.

There’s a certain charm and enchantment to this tale, which is grounded, persistently, by the realism of Kawase’s style. The filmmaker treads a delicate line and where certain scenes and lines of dialogue could be perceived as being overtly mawkish, the film gets away with it, as the profound, spiritual quips that Tokue preaches, her poetic rambling as she speaks of the moon and the stars (while completely adamant that beans tell stories) feels magical and enlightening, thanks to Kiki’s venerability and sincerity. The veteran performer turns in a truly magnetic display, so nuanced and subtle, and distinctly empathetic, while never playing the role for pity.

There’s a vibrant aesthetic to this piece too, colourful and vivacious, adding to the fairytale like charm, and yet managing to do so without compromising on the commitment to realism. It’s because Kawase finds the enchantment within real life, barely even using music as a means of manipulating the viewer’s emotions, using the ambiance instead, such as the birds singing or the sound of the breeze hitting against the cherry blossoms, to help create this world. It feels emblematic of Tokue’s own perspective also to take this approach, for, as she professes, there are stories to be told by the birds, the beans and the breeze – so let’s listen to them instead.

Kawase must also be commended for allowing the viewer to become so invested in Tokue and Sentaro, caring so much despite knowing so little. As the former declares, everyone has a story to tell – and this just happens to be theirs, and it’s one you won’t regret indulging in.

After the Storm Review

Ingrid Bergman: In Her Own Words Review