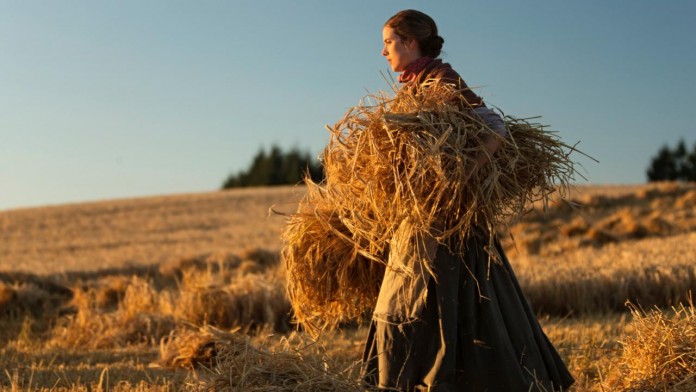 It has taken all of 15 years for the venerable auteur Terence Davies to bring Sunset Song to the big screen, and sweeter than the satisfying sound of the bagpipes, it will be music to the ears of many that this glorious adaption of Lewis Grassic Gibbon’s esteemed piece of Scottish literature is finally upon us. Particularly when in the hands of such an indelible, resourceful filmmaker who returns for the first time since The Deep Blue Sea (2011), with a profoundly moving, ineffably sumptuous coming-of-age drama.

Set in the very early stages of the 20th century, we meet the endearingly blissful teenager Chris Guthrie (Agyness Deyn) who lives somewhat comfortably, with her beleaguered mother (Daniela Nardini) and aggressive, volatile father (Peter Mullan), who may be protective over his only daughter, but doesn’t seem to pay the same respect to his eldest son, Will (Jack Greenlees) who he intimidates and attacks, physically. But Chris is able to find a semblance of peace to her existence, thanks to the introduction of neighbour Ewan Tavendale (Kevin Guthrie), as the pair take an instant liking towards one another. But with the First World War on the horizon, it seems any sense of equanimity is set to be dramatically disturbed.

The role of Chris is a remarkable one, as she’s such an engaging and affable entry point into this world. Considering the myriad of tragic occurrences that plague her life, such is the calming naivety of her youthful demeanour, it ensures the film deviates away from any sense of melodrama. The viewer adopts her unique, pure outlook on life and it creates a certain charm and spirit to a film that, from a narrative perspective, is severely lacking in either. Much of that is thanks to a commendable, accomplished turn from newcomer Deyn, as the former model has a real presence that makes for a beguiling, absorbing leading lady. That being said, there are a couple of emotionally rich, taxing sequences that are a little beyond her, but it’s early days yet in her fledging acting career.

It’s intriguing how Chris narrates proceedings too, and in the third person. It makes her an omniscient presence of sorts, adding to the almost heavenly feeling about her, in spite of the fact she feels so real, and so human at the same time. It’s a technique that is emblematic of a filmmaker who is persistently creative in his means of storytelling, yet always with such a minimum contrivance. This subtly innovative director presents narratives that are generally so different, yet tonally comparable, and distinctive to his unique sensibilities. In Sunset Song the editing is striking and seamless, and the way the camera always seems to be moving adds a certain wooziness to proceedings that enhances the more enchanting aspects to this otherwise naturalistic tale.

It helps when set in front of such a beautiful landscape too, which is imperative to this picture given we’re studying this young woman’s relationship not only with her loved ones, but with the environment that she inhabits. Another staple of Davies’ work are scenes of communal singing, and fans will be encouraged to know that it’s communal singing aplenty in this endeavour, which is, as always, chilling and inspiring – just like his movies.

Exclusive: Ninian Doff, Samuel Bottomley, Lewis Gribben and Viraj Juneja Get Duked and the influence of The Goonies