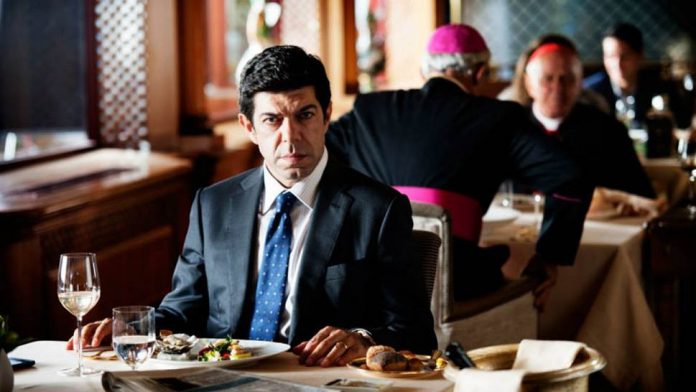 Couched in the sort of kinetic and pounding direction that has hallmarked director Stefano Sollima’s work on Gomorra – the now two series-strong television take on Roberto Saviano’s book of the same name (and itself adapted into a film in 2008) – the gruesome Suburra is a down n’ dirty, and thoroughly testy affair.

In fact, there is enough portent and atmosphere here to host a cliché exhibition specialising in pathetic fallacy. But don’t let that put you off. Full of foreboding it may be, but it has enough smarts and twists to astound, enrapture and engage.

Set over the course of 7 days leading to ‘the Apocalypse’, matters swell after a drug-fuelled tryst between politician Filippo Malgradi (Pierfrancesco Favino) and two prostitutes (one under age) spirals into a devastating predicament for the man in office. Meanwhile, the dastardly wiles of the mob are set on a collision course as a lone, respected mafia member known as ‘the samurai’ (Claudio Amendola) tries to keep the peace amidst escalating tensions. The glue that could bind these warring factions is the promise of turning Ostia into a mini Las Vegas. If it comes off, all can eat from the same table. Everyone will be happy. But they require political pull. If only they had a politician facing dire straits.

As with all of the intricately wound tales set around mafia, politics and the lay person, Shakespearean themes dominate; their timeless traits offer pitiful, perpetual resonance. In the case of Suburra, they are relayed with compelling cinematography and knockout performances. Before reaching the screen, the source book passed through the hands of two screenwriters, as well as having the original two authors on board. That could smack of too many cooks. Somehow, they’ve managed to pull it off. Throbbing with atmosphere, collectively, they have sculpted both a terrifying and riveting ride.

Due to its considerable success in its domestic market, news has recently emerged that Netflix is behind plans to turn this into a television series. It isn’t a surprise. What is interesting to note is the about turn for Sollima; it is he who sat at the helm of both Romanzo Criminale and the aforementioned Gomorra when time came to make a series following a successful cinema release. This time around, however, it is understood that he will depart and pass duties over to someone else. They will have a tough act to follow.

MIchael B. Jordan is a lean, mean fighting machine in new trailer for ‘Without Remorse’