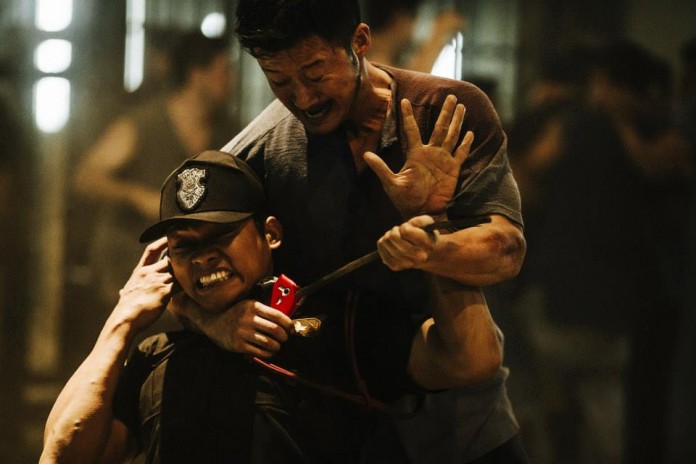 This “sequel” to Wilson Yip’s SPL: Kill Zone (2005) is a detached tale set in a new universe but casts returning actors Simon Yam and Wu Jing in completely different roles. SPL 2: A Time for Consequences is a simultaneously tight and sprawling martial arts thriller, entwining crime sagas with complex drama, fist-scathing scraps and grand, expansive action. It’s stories meld well with subtle noir tones, perfectly suited to the thrashing mayhem. While a soaring, operatic credit sequence, against a blood red back drop, provides a fitting intro, and seems more enigmatic than most recent Bond openers. SPL 2 then propels the viewer brain-first into a bewildering set-up that clasps attention due to sharp direction, superb performances and inimitable, on-the-nose editing.
Sick and shadowy Crime Lord Mr Hung (Louis Koo) is a cloaked, morose and hugely feared figure who is desperately in need of a heart transplant. Hung’s closest known blood-match is his brother Jun Kung who is unfortunately in hospital under police observation. Meanwhile, undercover cop Kit (Wu Jig) ripens a drug habit to efficaciously blend into the role of a faux gangster working within Hung’s organ trafficking cartel. After the syndicate bungle an attempt to kidnap Kung, Kit’s cover gets blown. He is then swiftly sentenced to life in a Bangkok prison by crooked cops working for Hung. In the meantime, Kit’s uncle Chan Kwok-wah (Simon Yam) , who is also his police supervisor, sets out to free his nephew as he repeatedly attempts escape, much to the fatigue of exasperated warden Chatchai (Tony Jaa).
Even though its structure may be often convoluted, refined character crafting and solid drama add substance to SPL 2’s complex mapping. Poi-soi ‘s direction is slick but not too elegant: the camera glides in sync with the action, allowing screen activity to dictate his style instead of the other way around. This dexterity allows SPL 2 to relay complex plot components in as acute a manner as possible, so the stories unravel with nimble volatility. It will initially seem confounding due to the numerous strands and characters but Cheang Poi-soi doesn’t forcibly simplify for the sake of shallow spectacle. The film darts back and forth in time and location from Hong Kong (Kowloon) to Bangkok’s Chinatown but Poi-soi dislocates his story with retina-stretching set pieces to give the brain a break from the plot intricacies.
Three gargantuan action sequences sector the narrative but aren’t awkwardly shoe-horned in. Each set-piece serves a greater purpose for the story while the action fuses efficiently and is as dextrously choreographed as the elaborate plot. Poi-soi displays remarkable adeptness and conveys a fitting naturalism throughout Lai-yin Leung and Ying Wong’s extraordinary tale, recognising that modish, schematised direction may stifle the viewing experience when paired with an intricate narrative. The drama and characters also augment the finer details, further bolstered by great performances.
SPL 2 is a colossal, bombastic and brilliantly crafted action thriller with a strong script and multifarious characters. While the story may alienate viewers less willing to surrender to its ornate elucidation, the incredible action set-pieces and hand-to-hand combat scenes will undoubtedly astound, and go some way to compensate for the plot perplexity.