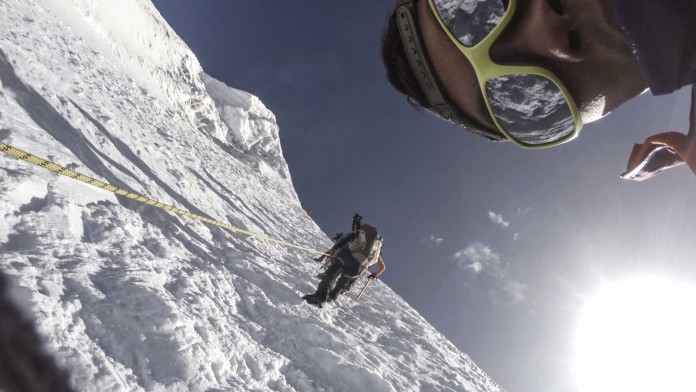 There is something to be said for being in the right place at the right time. Most filmmakers will concede that good fortune plays its role in securing something exceptional. Sadly, in the realm of documentary, it is usually being on hand and in the presence of an unforeseen tragedy that makes for vital viewing.

For Jennifer Peedom, her intentions for Sherpa were set out in a simple premise: to chronicle the response from the widely reported events in 2013 when, on top of Everest, a fight broke out between European climbers and their local Sherpa assistors. Peedom wanted to capture the subsequent season to see if the fractious, fraught atmosphere remained. Sadly, it meant that she was on hand for an unprecedented catastrophe – the worst in the recorded history of Everest – and the unlikely response.

To consider the role of the Sherpa, the documentary must to take us back to 1953. And take us back it does, to the occasion where New Zealander Edmund Hilary and Sherpa Tenzing Norgay reached the summit in a spirit of co-operation. Looking at history and to observe the lack of equal recognition afforded to Norgay and then to his subsequent compatriots helps to explain the shifting attitudes in the region. Add on top of that the repeated risks that they face every season, alongside the raw financial deal they are getting (thanks, in part, to their own government, who excise a huge chunk of the money) and there is groundswell for disgruntlement. That disgruntlement plays out here.

Ed Douglas, a mountaineering writer, provides authoritative testimony of the trials and pitfalls of the ominous peak and, in addition to interviews with locals, there are others with both the expedition organisers and the intrepid visitors. This access is a result of Peedom’s considerable experience in the region (as evidenced by her luminous CV). She is skilfully aided by experienced producer John Smithson (127 Hours, Touching the Void) in what is a well-crafted, riveting piece.

This is a tale of life and death, tragedy and hope, forged from one of the darkest chapters in the history of our tussles with Everest. Emitting a sympathetic voice to the Sherpa cause, a compelling story is presented of a noble culture reclaiming their true worth. It is also a compelling lesson in people power, as well as being a pummelling indictment of a repeatedly rapacious exploitation of a minority people.

The documentary genre is littered with important and powerful films. Sherpa holds its own amongst the top tier and is guaranteed to linger in the memory long after the final credits roll.