Home Features On set with t... 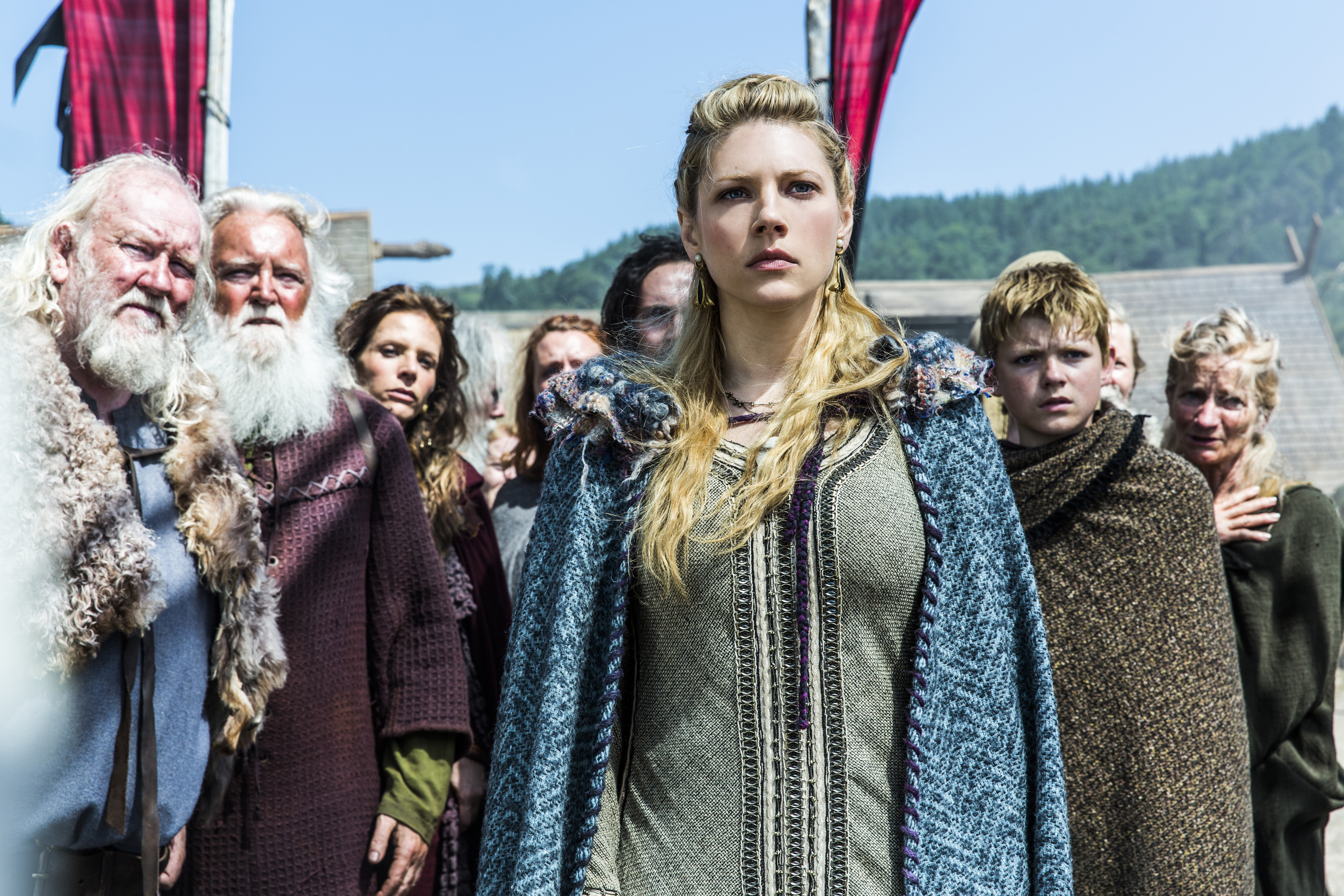 Storytelling and history are no strangers to one another; the former offering audiences an opportunity to connect with the past through entertainment. For some history is interesting if only because we can’t touch it, and therein TV and film offers a means of opening up the past.

Writer and producer Michael Hirst frequents the past, preferring to stay out of the present day, telling us, “For me it is the richness and the texture, which is why I don’t like writing about what I call my contemporary life, because I don’t see the richness.”  From Elizabethan and Tudor England, Hirst’s latest historical drama finds him travelling deeper into the past where he connects English history with the history of the continent to contribute a thoughtful discussion of the Vikings outside of their stereotypical image.

As the cast and crew were busily shooting series three HeyUGuys sat down on the set  to gauge their thoughts on series two. In a three part feature series on set special, we look at creating the past with production designer Mark Geraghty, talk to lead actress Katheryn Winnick about stepping into the past and her thoughts on the storytelling process and discuss with the cast and crew creating a long form TV drama.

To commence the feature production designer Mark Geraghty spoke with us about creating the past and how ironically “The best design work in the world goes unnoticed.”

Do you feel any pressure to make things as accurate as you can?

Not really. We try our very best. I think the most important thing is to tell the story, and to give the atmosphere and perception of the time that we are in. In this period there is so much historical contradiction, and everyone has their own idea, but no one really knows. I suppose it is intelligent guesswork at its best.

So I think what you do is you use the information that suits your show and allows you to tell the story. It is more about creating the atmosphere. We try to be as historically correct as possible, but it depends on who you listen to. We talk to historians and we read up a lot about the period and people’s visual interpretation of the period. There have been many documentaries made, and there have been a couple of big finds. We are pretty certain what boats and swords looked like and we are very certain about the Roman influence particularly in England and mainland Europe. So I think you take from that to tell the story. But it’s basically about telling the story and creating the atmosphere.

How closely do you work with Michael and what leeway does he give you? Is it a tight collaboration?

Very tight. Michael is a very visual writer and so it jumps off the page at you – there are no grey areas. We bounce ideas of each other – different ways of doing things, different places. I might come up with a good idea which he’ll put into the script, but obviously it’s what’s possible to achieve in the time and with the restraints of any show.

You might say to Michael that’s really big, and try to give him everything he wants, but there are occasions where you might say, “Look Michael, we have this fantastic location, can I bring you up here? Can you write a scene around that? I know it’s not what we talked about, but I think it’s brilliant, although you’ll have to change the script slightly.”

But it’s fantastic to work with Michael and he’s really open to suggestions, which is great. But most if the writing is so visual that it just jumps off the page.

The difference with the novel or short story is that you can write whatever you imagine. But with a visual medium such as film or TV, we perhaps forget just how much the writer has to create around the design issues, and therein we are not always seeing the original vision but rather a compromise.

I think collaboration is very important. I think the essence of it is the vision to tell the story in the best way possible when working with Michael. Everyone in the world has a different take when they read a book.

Obviously my input in the show is the way I design things, and what I have learned and my style which I bring to the show. It is collaborative, but at the end of the day it is one person’s collaboration, and you’ve got to try and go with it because it’s got to reach a big audience. You’ve got to try and go back to that period in your head and think what’s right; what’s wrong? From a design point of view we’ve got to look into the whole social living aspects of people, their stance in the community, and their character. It’s really like forensics in a way, because you are trying to put the right person in the right spot. It’s all about their personality and their life.

Correct. It has always been, and obviously colour and texture for the mood of every scene is very important.

It is a discussion, and it will always be up for debate – what was right and what was wrong. But we have the responsibility to take the bull by the horns and say okay this is what we think. We have never done anything ridiculous or pushed the boat out. We were always very conscious – okay if they made this, the art on their walls, their Gods or props – well that goes because if they can make that pot out of metal then they can make this. We know they were able to make a pot and so we know they could make this then. We know they had swords and they had metal works, different materials and textures. We know they had natural colour from berries, and so we introduced colour. We know there was a big difference between societies in Scandinavia for example, and the Roman influence was quite heavy in Britain but it never quite reached Scandinavia.

How did you become involved in production design?

I wanted to be an architect but I failed. I started in the art department, and my first film was one that never happened, and so that was an introduction to the industry. But it was set in 1014 and it was a Viking job, and so this show ironically brings me full circle. But at least this is getting made.

What you design everybody sees and it is set in stone. Whilst everyone has a different experience when they watch the show, your element is the one solid, stable or permanent backdrop that everyone shares.

Absolutely, and again you gave to be conscious of that. You can’t in any way be self-indulgent and start designing stuff for yourself. You need to be very careful with that, and your bible is the script – you have to design to the script.

We deal with different directors – different styles and views. We have the responsibility of the overall look of the ten episodes, and so sometimes we have to push them in the right direction. With their different styles we do give them leeway, but there is a line we will not let them cross, because we have to look at the overall picture of the texture of the show. Really you just have to keep going back to the script. The script, script, script is your bible, and it’s all on the page.

So you guys keep in check the creative types who can sometimes let their imaginations run away with them?

Yes. People will say things like “Oh they’ll never know in Arkansas. They will never recognise… They won’t know.” But we know, and we have to be true to the story.

The directors are fantastic, but they all want to leave their own mark on it. It’s great because we get different directors and so there is the versatility of it all, but we have got to keep a handle on the overall look.

How different would the show have been if you’d only had one director throughout?

But that’s like a feature film, which is my background. I’m normally used to working with one director on a project and that’s it. In a way feature films are easier than TV shows because you are not working with different directors, and sometimes different camera people – often it’s not the same camera person all the way through. Vikings we are lucky it is and P.J. [Dillon] is fantastic. But you are dealing with one director, one cameraman and one story, and really the collaboration with the director is what it is about on a feature film.

What are your thoughts on CGI?

It’s a necessary tool, and it saves our bacon. I work very closely with them, and even after we stop filming I go all the way through to the end with them. I won’t let anything go past me, and so it’s a very important tool. I don’t think we can achieve these shows without it, but I think you gave to be very careful how and when you use it.

Is it a matter of using it to enhance practical effects?

I think if possible you want it to be 60% reality minimum – 40% CGI in the frame. Whilst technology is so good now, people tend to overuse it. It’s a tool that’s fascinating, but I think we need to be disciplined with its use. Crowd replication is fantastic, and we could never afford the extras for battles. There is always the removal of modern stuff because we are constantly dealing with electrical pylons and poles.

We would try to find locations all of the time that are absolutely perfect, though we would be very limited. So CGI is fantastic tool and it really does help. It also can give a picture scale, but you need to be really careful as to how you are using it. We have a great team that is brilliant, and it works – the technology is fantastic.

It’s about finding that compromise.

The way I look at it is if I had a wish list that mountain would be there or my set would be three times higher. That’s what you use if for. I think what you have to do is if you were to imagine that picture, and that’s what it would be. But the tendency with a lot of fashionable CGI usages is it’s just too much and they leave it too long. I think the audience especially on a show like this if they don’t believe it for a minute then you’re gone. So I think we use it well.

Embracing the limitations of the technology as well.

The cast of Vikings: Valhalla on the new show, stepping in the world of the Norseman & its links to Die Hard