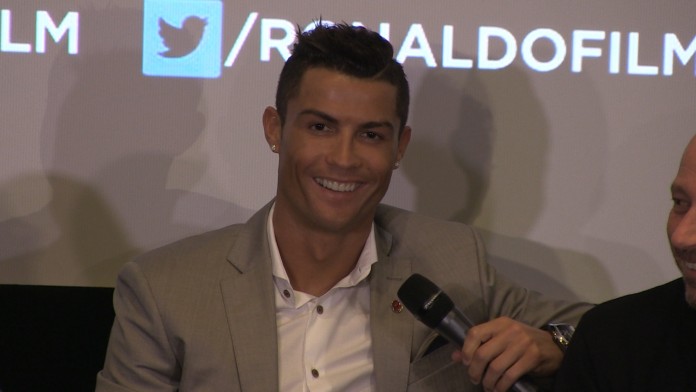 Anthony Wonke’s feature length film on the life of one of sport’s most successful and controversial figures is the latest example of the resurgent interest in the documentary form. Asif Kapadia, the man behind the powerful films on the lives of Ayrton Senna and Amy Winehouse, is executive producer on this film, simply called Ronaldo.

As much as examination of the whirlwind of fame as it is about the man at the centre of it, Ronaldo the documentary gives his fans a close look at the man who has inspired devotion and ire across the world. A fascinating subject rightly due for a spotlight – the film is out in cinemas today.

The London press conference took place today and you can watch it below – The World Premiere will be taking place this evening in London’s Leicester Sq so get down there now Ronaldo fans!

Want to embed this video on your site? Or share the whole video of the event?

Here’s a handy synopsis of what’s what,

Filmed over 14 months with unprecedented access into the inner circle of the man and the sport, this is the first official and fully authorised film of one of the most celebrated figures in football.

For the first time ever, the world gets vividly candid and unparalleled, behind-closed-doors access to the footballer, father, family-man and friend in this moving & fascinating documentary. Through in-depth conversations, state of the art football footage and never before seen archival footage, the film gives an astonishing insight into the sporting and personal life of triple Ballon D’Or winner Cristiano Ronaldo at the peak of his career.

From the makers of ‘Senna’ and ‘Amy’, Ronaldo takes audiences on an intimate and revealing journey of what it’s like to live as an iconic athlete in the eye of the storm.