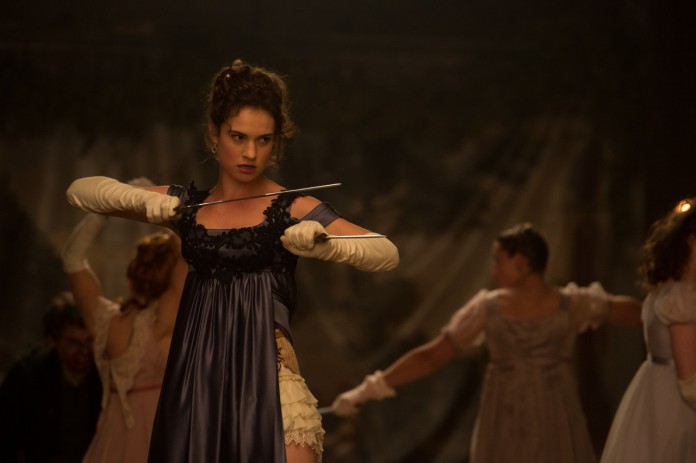 If you could name two things we see far too much of in contemporary cinema, superfluous re-adaptations, and zombies movies both spring to mind. So you would think that Pride and Prejudice and Zombies – Burr Steers deranged reimagining of the renowned Jane Austen novel, would be a complete disaster – but it’s far from it. And people say two wrongs don’t make a right.

All of the familiar characters are present, from Elizabeth Bennet (Lily James) to Lady Catherine de Bourgh (Lena Headey), to Mr. Wickham (Jack Huston) as well as Mr. Collins (Matt Smith), Mr. Bingley (Douglas Booth), and of course, Mr. Darcy (Sam Riley) – as characters navigating their way around the interweaving romantic narratives, in a story of entangled relationships, caught between social classes in Regency era England. But there’s one notable difference to this world that we thought we knew so well; there’s an army of zombies roaming the countryside, wanting to infiltrate society. But the undead are more of a nuisance than anything else, and having been trained with specialist combat skills from her father, Mr. Bennet (Charles Dance) – Elizabeth and her four sisters are confident of not only falling in love, but killing many zombies along the way.

From the ingenious mind of Seth Grahame-Smith (the author also behind the spin-off graphic novel Abraham Lincoln, Vampire Hunter), the premise to this picture is certainly a fun one, particularly as we’re so used to seeing how zombies fare in a contemporary world, be that in Shaun of the Dead or World War Z – but the notion of the living dead is a perennial one, and in a supernatural world where this is possible, it would be as likely to have occurred back in the 19th century as it would now, so why not examine how zombies affect life during this era? It’s a constant source of joy to hear traditional, aristocratic language used when fighting off the antagonist, while by placing this within surroundings so familiar to us makes simply for unadulterated, compelling cinema.

The tone is spot on too, as a wonderfully tongue-in-cheek endeavour, epitomised mostly in Matt Smith’s comedically inclined turn. There’s a certain charm to the piece too, it never takes itself seriously but does so without cheapening the narrative in the process, implemented with a minimum contrivance. Often when films appear to be vying for cult status – as this is doing, in a rather bare-faced fashion – it can work in much of the other direction, but the balance is right, and there’s enough of a narrative to follow and emotionally engage in to decorate the more frivolous elements.

Though this resourceful and creative adaption of the Jane Austen’s tale uses up some artistic licence to say the least, generally speaking, and in spite of the monumental and significant narrative change, this maintains that same spirit and follows the same beats we’re familiar with, with other differences to the story rather subtle in their inclusion. Steers remains affectionately faithful to the characters and the structure, it’s just we’ve got a few zombies thrown into the mix, that’s all.