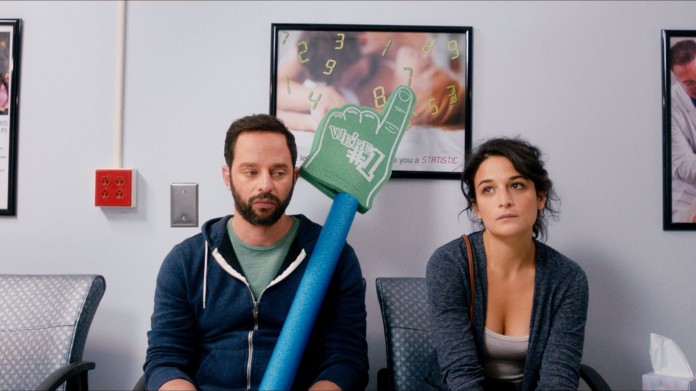 My Blind Brother is a film that, on the surface, shouldn’t really be that funny. Yet, a strong cast and great direction tells this very unconventional family drama in a relatively comedic way.

In 2003 Sophie Goodhart premiered her nominated short film My Blind Brother at Cannes to an amazing response. Goodhart was writing another film but then realised she wanted to revisit her short and adapt her preceding project into a feature film.

My Blind Brother takes place in Ohio and follows the tragic main character Bill played by the wonderful comedian Nick Kroll. Robbie is an incredibly supportive brother to his sibling Robbie (Adam Scott) who happens to be blind. Robbie is an incredibly motivated individual. He runs marathons, swims across lakes and pushes himself all in an effort to raise money for charity. Every step of the way his brother Bill is with him. Though Bill appears to be a backbone and confidant to his blind brother, as the film goes on you learn that things may not be all they seem.

The catalyst for the action of this film is the character of Rose, played by the wonderful Jenny Slate. We first see Rose after the funeral of her ex-boyfriend. Bill finds Rose very appealing so he approaches her. As they start a conversation Rose begins to cry as she admits she believes she is responsible for her boyfriends death being that she broke up with him just moments before he was hit by a car. This is a perfect depiction of what this film is. It takes very serious, unfunny elements and attempts to bring laughs though awkwardness all the while making the audience feel very uncomfortable.

Bill and Rose’s night ends with them going back home together, but the latter immediately regrets the actions the next morning while Robbie is left heartbroken, as a bizarre love triangle between the collective transpires.

The relationship between Bill and Robbie is the best thing in this film. Kroll who is mostly known for playing jerks in his previous film and TV roles is quite redeeming in this new role. It is great to see him play a victim here who is very much misunderstood and deeply complex. Adam Scott is great as Robbie, too – and the fact that he is blind makes him immediately a character you feel empathy towards. But Goodhart has written a character who is not redeemable in any way. He is incredibly rude, belittling and ungrateful to his brother and at times it is hard to watch (while at other it’s actually quite funny).

What hampers this film from being truly great is the juggling job Goodhart is attempting to pull off. Originally she was writing a film for Rose, when she felt she didn’t have enough material she blended it with her short film. This kind of becomes clear as you feel like there is a little too much going on here for one film. Though a film about family, regret, guilt and self discovery, as we progress it starts to become a little overwhelming. You are dealing with well thought out, great performances of deep complex characters but you are torn on who to truly feel sorry for or root for and it’s somewhat disorienting.

Goodhart is definitely an emerging talent however as she has produced a great, deep script and her direction of her cast is spot on. The film has some wonderful moments that will leave the audience laughing at times, and squirming in discomfort in others.