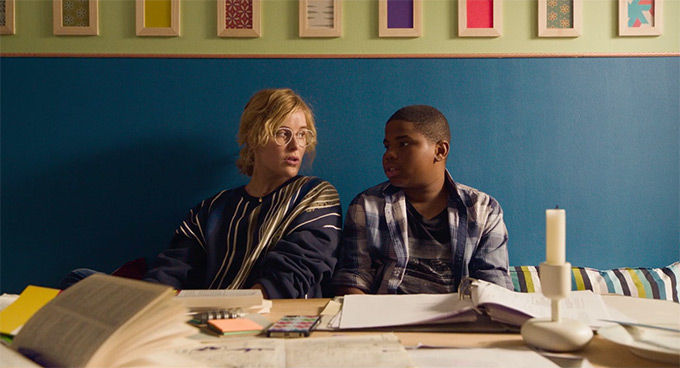 After his second feature This Is Martin Bonner was met with critical acclaim at Sundance back in 2013, Chad Hartigan is back with another outsider character study in Morris From America. This time the focus is on the trials and tribulations of Morris (Markees Christmas), a 13-year-old African-American teenager who is finding life in Heidelberg, Germany difficult to adjust to.

Morris’ widower dad Curtis (Craig Robinson) works as a coach for the local football team and shares his son’s passion for hip-hop. When Morris joins a local youth organisation, which his German language teacher Inka (Carla Juri) recommends, he becomes infatuated with strong-willed 15-year-old Katrin (Lina Keller) who is the only classmate to befriend him. It’s not long before Morris is performing a misjudged rap at a talent contest and pretending to take ecstasy with Katrin at an electric dance rave in a bid to win her affections.

Despite sharing themes of dislocation and isolation with This Is Martin Bonner, Morris from America is an altogether more flashier, upbeat, and enjoyable affair. Hartigan has a remarkable knack for crafting authentic, believable characters who are far removed from his own demographic. He builds an utterly convincing African-American father-son relationship between Curtis and Morris who are both fully-rounded and meticulously realised. At times their playful report is an utter delight to behold.

They exchange dick jokes and make fun of each other’s musical preferences, but there’s also a deceptive depth to their back and forth banter. In one scene Curtis exposes the vulgarity and irrelevance of his son’s self-penned lyrics “Fuckin all the bitches, two at a time, all you can take for just $10.99” (lyrics which Hartigan wrote himself in his formative years). Instead, Curtis encourages Morris to express the worries of his own teenage life through his lyrics instead of recycling the blatant misogyny of much hip-hop music. This moment perfectly exemplifies the story as a whole – it’s about finding one’s place in the world and learning how to express yourself.

Much of the film’s heart and humour emanates from this father and son dynamic but of course this isn’t just down to Hartigan’s sharp script, Robinson and Christmas deserve much praise for their work here too. Christmas is a revelation as Morris, he’s ridiculously confident and naturalistic when you consider this is his first ever feature film. Also, after years of caricatured bit parts, Robinson is finally given a meatier role which helps boast his vast comedic and (more surprisingly) dramatic range. On the back of their performances both deserve more fully-fledged roles like these.

Although the narrative adheres to the beats of the regular coming-of-ager, Hartigan keeps things fresh with a fluid, vibrant and engaging visual style. Regular collaborator Keegan Dewitt also provides an energetic score and the film’s attractive Heidelberg setting make for a winsome, charming fish out of water story that’s a sheer pleasure from start to finish.