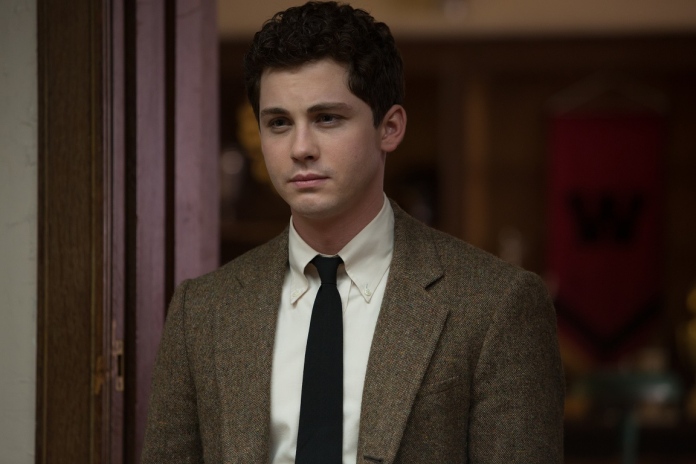 To mark the release of James Schamus’ directorial debut Indignation, we had the pleasure of speaking about the project with the film’s leading man Logan Lerman. The 24-year-old boasts quite a CV with star turns in The Perks of Being a Wallflower and Fury, and his latest represents a mature, nuanced display. Lerman discusses his collaboration with the director with co-star Sarah Gadon, while also speaking about his forthcoming performance in Sidney Hall, and the challenges that role has given to him.

So what first attracted you to getting involved in Indignation?

The first thing that attracted me to this project was James Schamus’ name in the headline of the email, the subject of the email said regarding this film. I’ve been a fan of his for quite some time and the prospect of working with him was the first thing that attracted me to the project and then what followed was discovering his beautiful adaptation and the wonderful scenes in the script for me to tackle. So the first one was really just James and his name.

Were you aware of Philip Roth’s novel – and did you read it during your preparation?

I wasn’t aware of the novel beforehand like a lot of people weren’t actually in terms of Phillip Roth’s catalogue of work. But I was very familiar with Phillip Roth and had not read Indignation before discovering the script and reading that and then the months that followed after my involvement, official involvement in the film of course I read the book several times and fell in love with that as well as the strength of Schamus’ adaptation.

This is James Schamus’ directorial debut – does that represent more of a risk when signing on to a project, not having any previous films to help you make that decision?

This is a very odd case because usually, typically yes any time you are working with a first time filmmaker there is a concern about navigating the process and whether or not the filmmaker will be prepared enough to handle the curveballs thrown at them. That being said James is the most experienced first time filmmaker out there. Of course this his first film as a director but he’s made so many films whether as a writer or a producer and executives that he was more than just familiar with the process. He knew how to make a film and manage his production very well.

Is there an enthusiasm that derives from a filmmaker working on their first film – and if so, it must be infectious?

Yeah I mean I don’t think James had any expectations as well in terms of how he was going to feel making his first film and once we started the process together I noticed that he was loving every minute of it. I mean I can’t speak for the rest of his creative experiences but it seemed like he was having the time of his life. He just seemed happy and it was generally a very enjoyable set to be on because James always had a smile on his face, always loved being on set and shooting and being the leader of the crew and I think he really loved his position. The more he loved it the more I think everyone loved being there and you know the director definitely sets the tone for everyone on set and James was having a great time so everybody else was having a great time and he was so passionate and everyone else in every department and actors I think we fed off of his passion and just tried to meet him every day.

Do you find it useful reading the original text a film is based upon, or can it sometimes be detrimental, for it may detract from the screenplay and leave you trying to remain faithful to the character in both the novel and the film?

Well it depends on whether or not the screenwriter or filmmaker strays away from the book. In this case James made a very faithful adaptation of Philip Roth’s novel. And actually lines and scenes are just plucked directly from the book and in that case the book was very helpful for me and I would just use it as more information regarding my character and the story itself and I would try to find things that we can bring back to the screenplay that might have been missing.

It’s a challenging role to undertake, as someone truly vying to identify who he is and what he wants to achieve in life. Not to mention his resistance in compromising his morals and beliefs. It’s a part with many layers – what was the biggest challenge for you?

If I were to pinpoint very specifically it was the scene in the middle of the film, there is a very long scene that’s an intellectual battle between the dean and Marcus, the dean of the college that Marcus is attending. There is very long rich dialogue and very complex emotions in that scene and it was not the most challenging scene I’ve ever had to tackle in a film it was definitely one of the top three and it terrified me. And I just put a lot of time and effort in to trying to fully realise the best version of that confrontation.

You share a wonderful chemistry with Sarah Gadon, was that something that came very natural to you both, or did you have to spend much time together before the shoot to help form that bond?

Yeah we spent a lot of time together. We were both very passionate about the project and had the time in our schedule to get to know each other and became very close. And that willingness on Sarah’s part to take the time to get to know me and to explore our characters together in the script only made the end product that much better. She’s extremely smart and dedicated and hardworking.

There is something so beautifully cinematic about 1950s America that lends itself to screen so well. It must be great fun wearing the outfits, seeing the cars – does it tap into that innate desire actors have to be a part of this world of make believe?

Yeah it brings everything together for me as an actor in terms of all the preparation I’m doing at home in my 21st century home and trying to read these lines in the mirror as myself its challenging and something that always feels off and rightfully so as it’s not 1950 right now so yeah once you’re on set you’re in character you’re surrounded by the cars, you’re in the wardrobe it brings all of the time and research and effort trying to figure out your character it just brings it all together.

You have some very exciting projects lined up, Sidney Hall in particular stands out – what can you tell us about that one? And what has it been like portraying someone in various stages of their life?

Good question. Sidney Hall I’ve been working on for a while, we’re editing it right now and finishing the edit and it’s a film I’ve been really passionate about for a long time and I’m really excited about it. The challenges of playing someone at three stages of their life is new to me and that’s the thing about every project I’ve at least been a part of in recent years is that they’ve all come with unique challenges that are new to me and that makes the filmmaking experience that much more exciting creatively from my perspective and what I get to do for my job so this one has been an experiment and I got to play around with things I’ve yet to play around with so I’m really stoked to see how people respond to it and I hope they like the film because we worked really hard on it.

Indignation is out in cinemas across the UK now. You can read our review from Berlinale here.