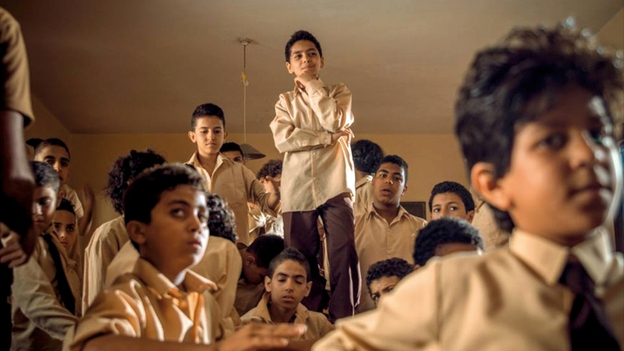 Not to be confused with Bronx rapper French Montana’s debut studio album, the identical-titled Egyptian film, Excuse My French (Lamoakhza) by writer-director Amr Salama (Asmaa, On a Day Like Today) is a charming and delightfully fun coming-of-age film about what it’s like to grow up a Christian in a Muslim world. It’s done with a fair amount of childlike innocence to it, which allows the filmmaker to poke fun at religion, politics and social conditioning as he sees it from his native perspective.

Hany Abdallah Peter (Ahmed Dash) is a young Egyptian boy living a privileged middle-class lifestyle with his mother and father, and attending a Christian private school. However, his father’s sudden death throws the family into turmoil, with his mother (played by Kinda Allouch) having to make the difficult decision of sending her son to the local, state-funded Muslim school to save money.

Hany is first dismayed by the lack of discipline and wanting to learn – him being an ardent fan of science, but soon learns how to fit in after being bullied. Funnily enough, part of that ‘fitting in’ also means holding up the pretence of being a practising Muslim.

This is certainly aiming to be a crowd-pleaser, even with its sensitive subject matter at the core, and was thankfully received as such at the Egyptian box office recently. It’s a credit to both Salama’s astute writing capability and the personality of the young star at the helm, Dash, who manages to carry off such a hot potato of a film with charisma and natural comedic flare to the bitter end, complete with expert comic delivery.

Salama addresses each new hurdle for Hany in an empathetic way and with just the right amount of humour for that situation, so watching this film does not feel like a chore or in any way witnessing the banging the proverbial political drum of change. Each set piece feels fresh and well rehearsed. Dash remains the catalyst when duty calls.

Interestingly, the filmmaker keeps a set colour scheme for each location too, with a surprisingly upbeat and ‘sunny’ environment at the most feared location for its lead character; school. In a sense, this is deemed optimistic, where attitudes can be changed and young minds opened for the better good. The more down-toned scenes are at Hany’s comfortable home that ironically feels very modern and progressive initially, but is perhaps less so as the family grieves and things stand still.

Perhaps more subtle inference as to the religious hardships for the nation are needed to make this even more satisfying for an international audience, without rocking the boat. However, the subtly is part of the film’s local appeal, so non-Egyptian viewers can only read between the lines to fill in the gaps. This does make the status quo feel a little more superficial than the filmmaker probably wants it to be. However, it’s a hard balance to strike and Salama does his best.

Excuse My French is one of those films that transcends religious-political strife and allows the audience a little bit of light relief to explore the differences in culture. It’s always fascinating to see how a native filmmaker views their country’s issues too, and Excuse My French acts as the perfect vehicle to do so while translating well to the rest of us in immensely enjoyable tone and production style. At the same time, it gives us an invaluable insight that only a news or documentary film could in a far dryer fashion.