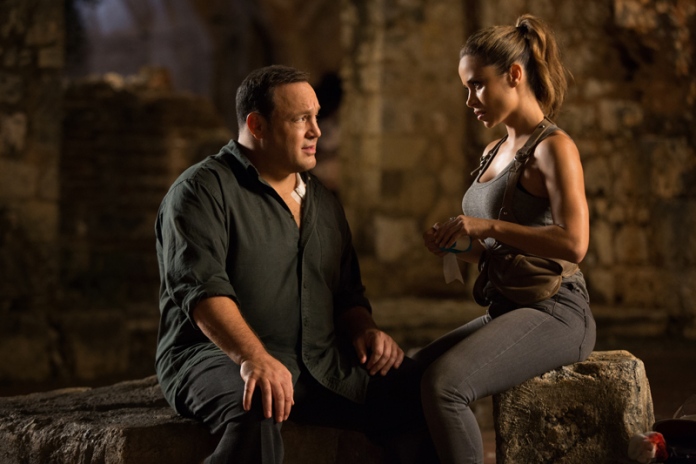 Netflix’s original movie True Memoirs Of An International Assassin arrives on the streaming video system on November 11th, and we sat down with leads Kevin James and Zulay Henao to discuss the action comedy, from Kick-Ass 2 director Jeff Wadlow, branching from action scenes to sweaty streams and a nice dose of Kim Coates love. Play on.

How did you find this project?

Kevin James: Jeff Wadlow, the director, brought it to me and, I guess it was on the blacklist of films that weren’t made, and I read it, I thought ‘Great’. We did a lot of work to it, we changed it, but I loved the structure of it, and it was just exciting to put together. Especially for me because it was such a departure from what I have done, so I was really excited.

Zulay Henao: For me it was a really cool audition process. Kevin and his wife were very kind in the process and I auditioned like any other audition in LA, I was very lucky to be able to talk to both Kevin and Jeff Wadlow on the phone, on Facetime, to give me good notes, what they wanted. They liked what they saw, so I joined the cast. It was an amazing experience for me, because like Kevin it was a huge departure for me, this is the first action anything I have done on film, so that challenge was really great to fulfil. Getting the opportunity to work with Netflix, Kevin James, Andy Garcia, all the people on the film was such a blessing.

Diving into the world of stunts for both of you, there’s some unbelievable and unbelievably cool sequences in this film that you were a part of. What was that experience like?

KJ: It was a tough process. We got up early, started rehearsing and practicing stuff. I was banged up, that’s what it was like throughout the whole film. It never really let up. And Zulay stepped into this role and just murdered it. It was great to watch her jump in. We had great stunt people, with Steve Ritzi and the crew, and those stunt guys and Alan D’Antoni really are the true heroes because they helped us with everything in the movie, made us look great. We were out there and we did a lot of the stunts ourselves.

ZH: The stunt team, the stunt captain, Steve Ritzi, were so professional, they made sure we got hurt the least possible.

KJ: They were the best stunt team I’ve worked with by far, they were really fantastic.

And they made you look really cool.

KJ: They really did.

Where was this film shot? It looked wonderful.

ZH: The natural beauty of that island.

KJ: In the middle of summer.

How was it working with Andy Garcia and Kim Coates?

KJ: I had worked with Kim Coates in a small movie early in my career, and just cracked up. I always wanted to work with him again, I kept saying ‘When can we find something for him?” and this movie popped up. I was happy for him to step in. And the same with Andy Garcia, I’d wanted to work with him a while and I don’t know where it came from, I think Netflix brought him up. We had a great time on set, we just really got along.

ZH: I’ll just add that I didn’t get an opportunity to see Kim Coates on set, but everyone said how funny he was. When I finally saw the movie, him eating in every scene, it’s really so funny. And for me, working with Andy Garcia was amazing, because obviously being Latin, and loving his work for so long, it was amazing to share a couple of scenes with him. He’s so intense, and such a great, iconic actor.

Would you do more action films? Like a franchise?

ZH: Are you kidding me? I want True Memoirs 2.

KJ: Not me, I’m out…. No, I’m kidding, it was fantastic, we loved doing it and t really is one of those things where you say you know your body’s going to be feeling it, but I’d be thrilled to do another one.

And with Jeff directing?

KJ: Oh absolutely. We’re talking about it. We’re on it.

Would you go to the big screen, or is Netflix the place to before creative control?

KJ: I love Netflix, because of the creative control. They were great partners, and everyone gets to see it. You can’t beat it. I prefer it. We had a great experience doing it, and I’m excited because I think a lot more people will be able to see it, and see it on their terms, and enjoy it.

And finally, if you were in a situation like the characters in the film, how would you avoid being shot?

ZH: I’d just run in the opposite direction.

KJ: I’d run towards them to make them think I’m crazy, and if that doesn’t work I’d roll around on the floor like I’m on fire.

True Memoirs Of An International Assassin is out on Netflix globally on November 11.