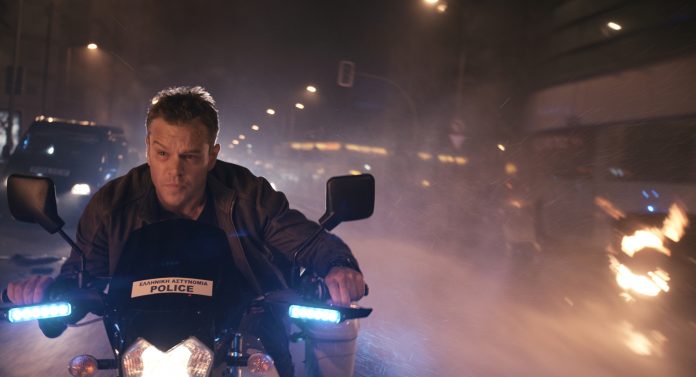 After nine years in the shadows Jason Bourne is back. The name alone will see box office sales soar, but do director Paul Greengrass and star Matt Damon still have a story to tell? For the longest time they both maintained the answer was no, that 2007’s The Bourne Ultimatum was – well – exactly that. Hell, if your lead character is an amnesiac super-soldier searching for answers and the last film’s tagline was “I remember everything” – where do you go? Options for plot progression look thin on the ground.

Thankfully there is a story to tell. Granted it’s a pretty familiar one, but when the payoff is some of the most breathless, nerve-shredding action cinema in recent memory it’ll do just fine. Concerns about Greengrass and Damon’s commitment levels are dismissed in a shower of broken glass and Molotov cocktails, the former throwing the latter into an early set-piece so real and so visceral that it could almost pass for news footage.

From start to finish it flirts with perfection, Bourne agreeing to meet series regular Nicky Parsons (Julia Stiles) just as an anti-government protest in Athens erupts into violence. She’s hacked the CIA and claims to have uncovered eye-opening details about how and why he was first recruited, but sinister government suits are already on their trail. So too is Vincent Cassel’s cold-blooded attack dog – a chilling reminder of what Bourne could be had his conscience been completely burned away.

There’s a relentless and seemingly unstoppable sense of forward momentum, Greengrass cutting seamlessly between the street-level chaos and the Langley command centre where black ops director Tommy Lee Jones and ambitious upstart Alicia Vikander are directing traffic. As Bourne and Parsons beat their retreat there’s not a single wasted shot, the camera darting this way and that yet somehow sustaining a laser-like linear focus. It’s an exhausting sequence capped off with a devastating emotional gut punch.

It also sets a sky-high standard that’s never quite recaptured. What follows certainly isn’t a disappointment, but as Bourne gets drawn further into the open the pace slackens and the tension drops. The action also becomes less grounded in believable reality, particularly a climactic car chase that puts Bourne behind the wheel of a Dodge Charger tearing down the Vegas strip. Cassel’s character (known only as the Asset) is in a SWAT van that cuts through traffic like a bowling ball slamming into skittles.

As a standalone scene it’s brilliantly staged and one hell of a spectacle, yet it’s also unmistakably more Hollywood than anything that’s come before. The one-on-one brawl it sets up, though, is desperate, nasty and bang in line with series tradition, as is the post-Snowden backdrop that pits personal freedom against public security. It’s also worth noting that in a film full of mayhem and destruction one of the most memorable moments is also one of the quietest – Tommy Lee Jones unable to stifle a flicker of venomous contempt for Vikander’s scheming Heather Lee. It’s worth seeing just for that.

“We found your daughter… She’s alive.” Trailer rolls in for ‘Orphan: First Kill’