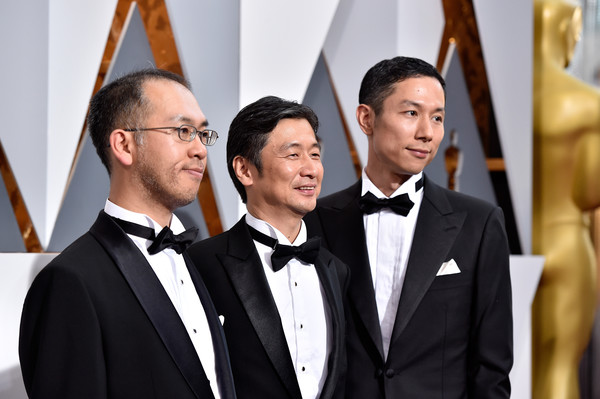 Reports have suggested that When Marnie Was There will be the very last feature length film to come out of the immensely popular Studio Ghibli. The Japanese animation studio’s 20th endeavour, and one of few away from the creative genius of Hayao Miyazaki, is instead helmed by Hiromasa Yonebayashi, and we had the pleasure of meeting the man himself when promoting the film in London. He was joined by the film’s producer Yoshiaki Nishimura, as the pair discuss what it was about this tale that inspired them so greatly, and predict what the future may hold for Ghibli.

This is of course based on a novel – what was it about this particular tale that inspired you both?

Hiromasa Yonebayashi: I thought that Anna and Marnie together were beautiful and I imagined the scene that they met, I visualised it and I wanted to animate it. It turned out to be very difficult, though.

Yoshiaki Nishimura: I started reading this book about 10 years prior to production and I wasn’t moved at all. But in Japan there were two volumes, and I never got through the first one, no matter how many times I tried. But after this production was decided, I read everything and it all made sense. I thought Anna meeting Marnie, who understands her, would be enough. But actually it wasn’t, it’s not just about love, it’s about identity.

It’s essential to study themes such as depression in movies aimed at younger audience members – how important do you think it is that young people can watch films like When Marnie Was There and learn they aren’t the only ones who might feel like Anna does?

HY: This film will connect with many people, and many children are tired and feel lonely so I wanted this film to sit beside them and push their back a little bit, so they can take a step forward, with courage.

The film is very emotional, particularly in the last quarter of an hour. I cried quite a lot – are you both able to get caught up in the movie in that way despite the fact you’re so heavily involved?

The subtlety and attention to detail is breathtaking, there’s one scene where a character is asked a question and she can’t answer because she’s eating something, so has to put her hand over her mouth. Small moments like that. How important is it to have these details to enrich the whole experience?

HY: We say that the soul of an animation lives in the details. I think that’s the same throughout all of Ghibli films. When Marnie is around and the world is like a sort of fantasy, so when she’s not around we had to show the real world, and that’s why it was important to get the background and movement of the characters with such fine details, to show people are actually living and the people on the screen are real.

Do you have involvement in who gets cast in the English dubbed version?

Was Miyazaki involved in this project at all? Was he ever present during the making of the movie?

HY: Yeah, quite often. He actually suggested some settings and locations as well, but he was making The Wind Rises at the time. But because he liked the original novel and our project, he was concerned. In terms of location he suggested Southern Japan and we thought it wouldn’t work with Marnie so we didn’t take his advice and we went our own way.

Marnie has blonde hair and blue eyes – why was she designed in this particular way? Because it’s quite different to the characters we usually see in Ghibli films.

HY: Yes I know it’s unusual but we chose it because of that very reason. But actually it’s because in the original novel there is an illustration of Marnie with blonde hair and blue eyes. It’s difficult to depict blonde hair in animation, but I took on the challenge, and we changed the setting to Japan so Marnie became a sort of mysterious existence in that setting. To put the Western world and Japan together, we managed to create an original world.

Of course there is a lot of talk this is the last film from Studio Ghibli for quite a while – just how long is a while?

So what does the future hold for the studio? Could this break potentially be the end?

YN: I guess there won’t be any more traditionally Ghibli feature films, but people who grew up with Ghibli are now actually becoming great creators, so I am looking forward to be involved with them. Of course I’m one of them myself.

Can you see yourself both making movies outside of the studio during this break that’s taking place?

HY: Wherever I make films, what Miyazaki has taught us in the technique and soul of an animation and that will always be with us, so I’d like to carry on make something new. I’ve done Arrietty and Marnie and they’re both relatively quiet films, so I’d like to make a film with a lot of action in it.

When Marnie Was There is released on June 10th, and you can read our review here.

Earwig and the Witch Review

Mary and the Witch’s Flower Review

Charming first trailer released for Mary and the Witch’s Flower