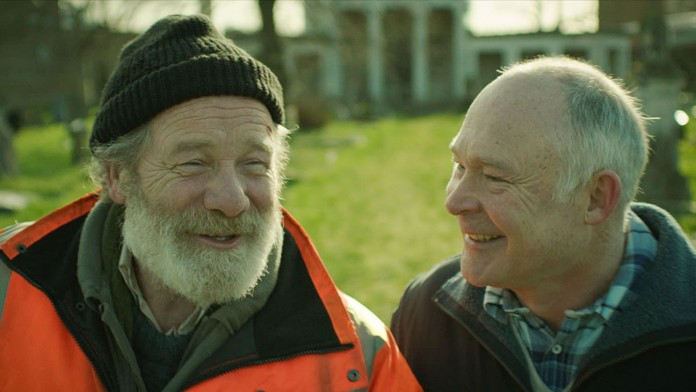 Whenever you’re walking back to the station after a day’s work, or wandering around the streets looking for a cab, you’ll often see somebody sleeping rough, without a home and having to make do with whatever small change they can raise. Each and every homeless person has a story, a reason they ended up in this unfortunate situation – we don’t know what it is, but we know that it’s there, which is enough. That lays the foundations for Jake Gavin’s moving drama Hector, which studiously lingers over the life of the eponymous protagonist – and much like those you’ll pass on the street, we don’t don’t know what led this man down such a destructive path, but safe to say we’re mightily keen to find out.

Peter Mullan takes on the titular role, of a man who has been living by the motorway for over a decade, roaming around, hitching rides to wherever he needs to get to. Following some discomforting test results which are to lead on to surgery, he decides it may be time to reconnect with his siblings, and so sets off down to London to find his brother, stopping in for his annual visit at the shelter where he spends Christmas.

Hector is a painfully immersive experience, as you feel bogged down by all of the baggage he carries (literally, not only metaphorically). It’s akin to that feeling you have when you arrive back from holiday with all your bags, you smell, you need a shower and a clean set of clothes, and just to put all of this stuff away. Hector has that same feeling attached to it – except the different is, Hector isn’t a Gatwick Express away from doing all of those things, and he has to carry these belongings around for good. Gavin really does a fine job of making you feel that anguish, just the unwashed hair, the infected cut on Hector’s forehead, his limp and the crutches, the trainers with holes in them, the damp socks, the bag with the broken handle… You really feel it.

It’s intriguing too to delve into the live of a man who has so little, and to see how he’s affected by his illness. So often when we depict this theme in cinema, we’re dealing with somebody well off, focusing on how the kids will react to the news, what will happen to the person’s job, or their house and money if they were to pass away? What about the lovely pet hamster? But how about a man who doesn’t have any of these materialistic goods, nor any family ties, with no home, no money, no job and certainly no pet hamster? But he’s still a human being with feelings and memories, and a fear of death – just like anybody else. It makes for a fascinating entry point, and it takes an overriding, relatable theme of being reminded of your own fatality, which humanises the lead, reminding us all he’s just like you or I, irrespective of his circumstances.

We never find out what is wrong with Hector though, as Gavin gives us so little to work with, and so it’s of great commendation to Mullan that we’re still able to care so greatly for his well-being. But that’s what happens when you cast such an accomplished performer. This is an intimate character study and the camera lingers over the lead, and to have that calibre of actor really is the difference between this working, and falling flat on its face.

There’s also an oddly festive feel about this piece. It’s a sad tale, granted, but all rather Christmassy. For all of the Xmas releases we see, contrived in their approach like Love Actually or the Nativity features, they think playing Rockin’ Around the Christmas Tree is enough to qualify you as being a movie of this playful, sub-genre. But Christmas is about giving, kindness and putting others first – and for all of the rotten luck Hector encounters, or the imbeciles he comes up against, there’s always someone who is like a Godsend, going out of their way to help someone in need. That’s Christmas.

Gerard Butler turns criminal in UK trailer for ‘The Vanishing’