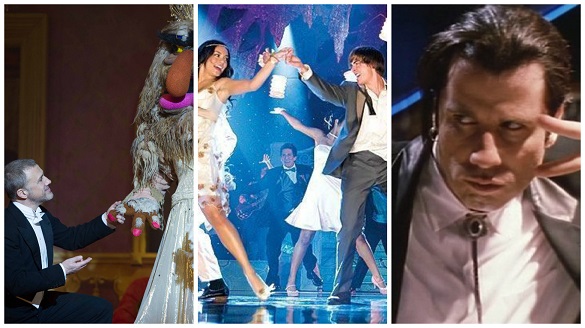 The relationship between film and dance is a rocky one with directors carefully manoeuvring around the many pitfalls of such a coupling. Some have had success and others have failed quite spectacularly.

More recently we have seen Tom Hiddleston in Crimson Peak dance the waltz and look incredibly suave in doing so, as if he couldn’t get any cooler. No doubt Christoph Waltz may have given him a few lessons…

For every Vincent Vega there is a Troy Bolton, making us squeamish at the prospect of yet another dance sequence on film. We take a look at some of the most unnerving dance sequences in film.

Brace yourself, you have been warned.

The Silence of the Lambs – Ted Levine

With Anthony Hopkins portraying the psychotically stylish, Dr Hannibal Lecter, and Jodie Foster as the inquisitive Clarice Starling, there are a plethora of jarring moments that have made this a film worthy of its iconic status.

But it is Ted Levine’s “Buffalo Bill” that adds a bit of flair to The Silence of the Lambs.

Cue the bizarre dance scene where Buffalo Bill showcases his body of work, so to speak, all to the weirdly fitting music of Q Lazzarus. Adding to this is the 80s music video feel to the scene as he poses and dances whilst recording himself on camera.

The final ‘reveal’ of Buffalo Bill in his skin suit is shocking when you realise he is showcasing the fruits of his labour.

Alex Garland has cultivated a reputation of being one of the most bankable names in Hollywood as a writer but it is his directorial debut, Ex Machina, that’s particularly noteworthy.

The methodical build-up of the story, with one of the characters intentions shrouded in smoke, adds to the sense of eeriness that is perfectly played out by Domhnall Gleeson and Oscar Isaac.

We then witness one of the most unfathomable dance scenes you’d expect where Oscar Isaac’s Nathan “tears up the fucking dance floor” to Oliver Cheatham’s Get Down Saturday Night.

The stupefied expression from Gleeson pretty much says it all. It’s a scene that shouldn’t work but does and makes Isaac seem more unhinged. The effortless choreography lifts the scene beyond cringe to a new level of pure deranged psychotic goodness.

There is no other way to truly get your skin crawling than a mass group breaking out in dance and Ella Enchanted has this down to a tee.

Wholesome, sickeningly charming and perfect dance sequences can make it as difficult to endure as the bloodiest of horrors out there. With a happily-ever-after ending, it is the final scene where we see Hugh Dancy and Anne Hathaway come together to Elton John’s Don’t Go Breaking My Heart.

It is what you come to expect from a film of this kind and understandably so with everyone seemingly all miraculously knowing the same dance moves. It was 2004, after all, but is nevertheless still jarring to see Hugh Dancy in such a role as we’ve come to know from his great performance in Hannibal.