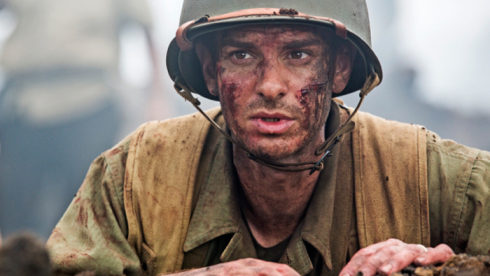 Way back at the 52nd Venice Film Festival, Mel Gibson (with some face-painted extras in tow) screened Braveheart, garnering him accolades as a director. We’re now at Venice 73 and this time a more ravaged but no less exhilarated Gibson returns with his WWII epic, Hacksaw Ridge.

The film is based on a real-life story of Desmond Doss (Andrew Garfield), a Seventh Day Adventist from the Blue Ridge Mountains of Virginia who becomes the first conscientious objector to win the Medal of Honour. His daddy (Hugo Weaving) is an alcoholic who constantly mourns the loss of his friends in the previous war and takes his grief and PTSD out on his wife (Rachel Griffiths) and kids with regular beatings and whippings. The constant abuse at home, and Desmond’s near killing of his brother Hal in a fight, lead the youth to turn his back on violence. Yet when people start enlisting during the war, Desmond feels a need to participate himself. He leaves his fiancée Dorothy (Teresa Palmer) heads to camp, suffering greatly there for his perceived cowardice or mental instability, before going on to save the lives of 75 on Hacksaw Ridge during the infamous and bloody battle of Okinawa.

Gibson has enlisted a strong cast and crew – almost none of them from the US – to tell this American story. Garfield is his usual, appealing self and he has a lot of work cut out for him: from the troubled teen with family issues to the wonderful courting of Dorothy and the hardships and horror he faces in the barracks and battle, his Desmond grows in conviction and stature. Weaving is his reliably brilliant self, despite a couple of dodgy moments the script throws at him. Griffiths has little to do, but like Weaving is always so credible. And as Dorothy, the lovely Palmer exudes warmth and humour. Vince Vaughn as Sergeant Howell that is an absolute treat. This is one of his funniest and believable performances in years.

As with Braveheart, we are treated to some exhilarating battle scenes. Like Braveheart, there is a lack of historical authenticity. And if Gibson’s film purportedly wants to celebrate this pacifist, it seems to take a lot of pleasure in showing us death and destruction. There is also a little too much focus on fire-balling the Japanese troops and portraying the “Nips” very much as the baddies. That said, the scenes are beautifully crafted and we find ourselves in the midst of the carnage and mayhem of war. There is also an interesting parallel with the bucolic loveliness of the Blue Ridge Mountains Doss left behind and the infernal Hacksaw Ridge where he saves so many lives.

Like Saving Private Ryan or Unbroken, this true story is so incredible that it seems like something Dreamworks would make up. Although Gibson has added a strong topping of cheese, this film will satisfy the appetites of anyone who loves a good romance, or a war movie, or a biopic. The familiar faces seen in almost every barracks of every war movie are here: the cowboy, the Pole, the Italian, the stud, the redneck, etc. And the final battle scene is particularly hard to swallow, with Doss losing his bible, and swinging towards heaven on a stretcher.

There really wasn’t any need to embellish this amazing story of Desmond’s immense courage – not only on the battlefield but primarily before he even got there. However, Mel Gibson has brought a quiet hero to global attention and for that we can stomach a little cheese and be grateful.

Mark Wahlberg turns to God in trailer for ‘Father Stu’