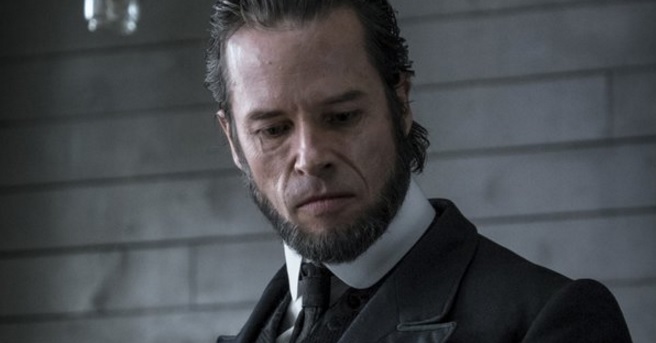 Martin Koolhoven is in competition in Venice with Brimstone, whose title immediately evokes images of evangelical preaching and a powerful whiff of the devil. What we get is a hellish horror story that is far too pleased to gaze on the suffering of women.

Brimstone focuses on one woman in particular: Liz (Dakota Fanning), a mute midwife in the nineteenth-century mid-West. She’s happily married to Eli (William Houston), living on the farm and raising his son and their daughter. This little house on the prairie idyll is rudely interrupted by the arrival of a sinister reverend (Guy Pearce) with a scarred face and gravelly Dutch accent. Liz recalls him from her past and her fear appears justified when we see him touch a pregnant woman’s belly only for her to go into labour and force Liz to choose between saving the mother or baby. When she chooses the former, she is blamed by the husband and the townsfolk for the baby’s death. So, is the Reverend actually the Devil?

The film is divided into four chapters (named after chapters of the Bible) and we skip between various periods in Liz’s life. We learn of her past and how she came to be mute, we discover the relationship between her and the Reverend and we sit through 148 minutes to found out if she will finally escape him (though as this chapter is called Retribution we have a pretty good idea of how things will pan out).

The story is a silly one, but this is not the problem with the film. I actually wanted the Reverend to be the Devil incarnate and not just a suspiciously adept killer and child molester. The sillier, the better. The problem is that rather than view women’s suffering – particularly in that place and time – and then lead to their empowerment, or at least Liz’s, what Koolhoven focuses on are the myriad ways in which to film them suffer. We get to see them bought and sold, prostituted, beaten, whipped, raped and hunted. Want to see a woman whipped? Tick. Want to see a pubescent girl dragged through the mud? Done. Want to see a man whip and fondle a child? Sorted. It’s true that a handful of men meet their own gruesome end – one of them wearing his own entrails as a noose – yet the director returns to and lingers over the scenes of the female characters’ torture and death. This is no Kill Bill-style bloody vengeance movie; it’s the story of a woman hounded and hunted ad infinitum.

This is not to say Koolhoven has no directorial skill. There are some beautiful images, particularly the aerial shots. There are similarities in colour and tone to other recent Westerns such as The Homesman and The Hateful Eight (another film that revelled in suffering a little too much). But the visuals are not enough to save it. Why Guy Pearce got involved in this woeful project is a mystery, not to mention Kit Harington making an appearance, for this is a nasty film and leaves you wishing you could un-see those scenes of so much abuse.

“Tonight, You will not sleep” chilling new trailer arrives for the BBC’s ‘A Christmas Carol’