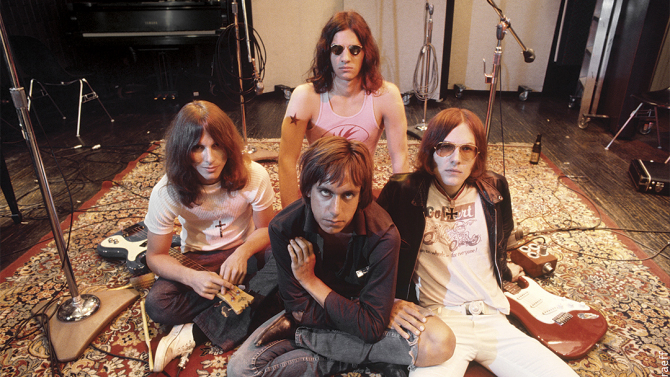 “That was sweating lunatic, Iggy Pop” – is how the nonconformist frontman of The Stooges is introduced by fictional radio DJ Alan Partridge, and it’s a representation that is somewhat widespread, renowned as much for his antics on stage as he is for his influence in music. With Gimme Danger, resourceful filmmaker Jim Jarmusch seeks to alter the portrayal of this eccentric, irrepressible individual and remind us quite how brilliant Iggy and the Stooges were as an outfit.

The indelible, raw bass of I Wanna Be Your Dog was released in 1969 – predating the celebrated innovators of punk such as The Ramones, The Clash and The Sex Pistols. The sheer influence of the Stooges is irrefutable, and understated. Forming in Detroit, Iggy (whose birth name is James Osterberg), Dave Alexander and brothers Ron and Scott Asheton had an electric, uncontrived attitude, serving up something of an antidote to mainstream, popular music. Here Jarmusch chronicles their story, from their conception, all the way up to the present day, casting a harsh light on the highs, the lows and each and every band member who adorned the stage on behalf of this collective.

Though following a strict chronological path – which at times is to the film’s detriment, almost too structured and unadventurous in its execution, we do begin proceedings with a montage compiling archive footage, and interviews with Iggy, detailing the band’s eventual demise. It’s a tried and tested technique, but one that rarely lets you down, adding a foreboding sense to proceedings, particularly when we’re looking into the initial forming of the band, ambitious, wide-eyed youngsters with the world at their feet, and yet we’re aware that the band’s success was relatively, and frustratingly, short-lived.

Gimme Danger works as something of a portrait of Iggy Pop, for the majority of the film we see, and hear from his perspective, as he eloquently runs through the past few decades, taking the viewer on this journey alongside him. For someone so outspoken and unpredictable it’s a slight shame he’s so philosophical, though while somewhat less engaging, it does make for a more informative production. But Jarmusch seems intent on not dwelling on the more controversial aspects of the band, the deaths, the sex, the drugs – this is not the platform for such anecdotes, as a feature that thrives in celebrating the actual records, which in some ways is refreshing. Though that being said, for a film all about the music, we don’t hear quite enough of it being played, as a few more Stooges tracks wouldn’t have gone amiss.

But with Jarmusch at the helm you are guaranteed, at the very least, an accomplished endeavour, and Gimme Danger is certainly that – while the distinctive sensibilities of the director do come through in parts, particularly in the inventive editing of the piece, with animated interludes implemented, with a creative means of referencing and storytelling. So Alan Partridge wasn’t far wrong, a sweaty lunatic is fair description of Iggy Pop, but boy, isn’t he a talented one.