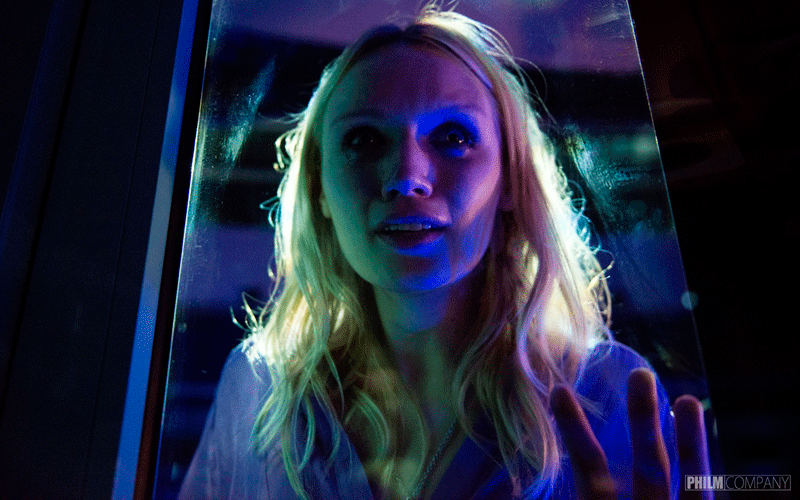 Following in the footsteps of Peter Bogdanovich’s Stalker and Brian Trenchard-Smith’s Dead End Drive-In, Phil Hawkins’ The Last Showing returns us from our adventures on the moors and in the claustrophobic confines of the jungle to turn the place where we appreciate the filmic dreams conjured up by filmmakers into a nightmarish and hellish place.

If back in the 1980’s Robert Englund rolled over sweet dreams like black storm clouds, then three decades later his eye has turned to the multiplex where we dare to dream and lose ourselves in worlds removed from our reality.

In a special four part feature, writer-director Phil Hawkins, producer Alexandra Baranska and lead actors Finn Jones and Emily Berrington offer a series of youthful perspectives from behind and in front of the camera, before Robert Englund takes the stage to present the cineaste behind the icon.

Moving forward, Alexandra Baranska shared her thoughts on encountering both the joys and tragedy of cinema illuminated within the story of The Last Showing.

Why a career in filmmaking? Was there that one inspirational moment?

Alexandra Baranska: I used to work in distribution for Warner Brothers and then Twentieth Century Fox. There I got to know a lot of filmmakers, go on set visits, and I felt that I was learning more and more about production. It started to inspire me and then I came across a great book by Lawrence Turman, the producer of The Graduate and many other films called So You Want to be a Producer. It’s fantastic, and it inspired me to actually try to do this despite all of the obstacles.

Personally I like organising, and for a producer that’s a good skill to have because there’s a lot of organising all of the various elements, and I really enjoy that part of the process.

I met Phil about five years ago, and he was interested in what I was doing, and I was passionate about what he was doing. So we thought well how about we combine our knowledge and start up a company and do something creative together – use my knowledge of distribution, all the kinds of art, what sells and financing etc. I’m thrilled that the first one was The Last Showing, and we’ve got quite a few on our slate that are coming up in the future. But so far, so good…

Peter Bogdanovich’s Stalker and Brian Trenchard-Smith’s Dead End Drive-In both take the space in which we watch films, and turn it into a nightmarish hell. What was the genesis of The Last Showing – was there a similar intention on your part?

This was the most fascinating thing when I first heard about the project. It was an idea Phil had many years ago, and it was first a short, which he then he developed it into a feature screenplay. He wrote it very quickly and sent me the first draft, but a lot of remarkable work has gone into that draft since.

I just remember instantly falling in love with the idea of going to watch a film that is set in the cinema – something I’ve not seen before. So that was immediately a great hook, and it helped us along the way because whenever we talked to people about it, everyone was immediately enthusiastic about the concept, and that really helped us.

But it was Phil’s idea and kudos to him, because he had this in his head for quite some time, and I’m just glad he finally found some time to actually write it.

It is often said that everybody’s got an idea for a novel or a film, but in The Last Showing Stuart takes it to the extreme. Contemplating Stuart’s role in the film and the debate that violence is bred by mass entertainment; do you believe that the violence originates from within us or as a result of the mass media?

It’s interesting that something changes in Stuart. He is not a violent person, and while there are moments of violence in the film, they don’t really take over. This film is not about the bloodshed; we are about the psychological horror, and it speaks volumes of Phil. We actually spoke about this a lot with Phil, and he always said that what scared him the most is that a serial killer can be sitting next to you on the train; could be your neighbour and you just never know. It’s the people that you least expect that can turn and do crazy and awful things.

I think with Stuart you want him to be unassuming, small and subdued – creepy but unassuming. So I think that’s the beauty of being able to scare people using that approach, and pushing it within the storyline. That is what definitely scares me the most, and I remember watching it for the first time a few months ago and being on the edge of my seat even though I was present during the filming. The film offers an impact that is a lot scarier to me than seeing some of the gore in the SAW or the Final Destination films. They obviously had their audience and market, but I think we are trying to do something just a little bit different here.

How did Robert become involved in the process?

He was amazing, although to be honest we never in a million years thought we were going to get him. I remember we were sitting and deliberating who would be our absolute top wish list, and he was at the very top. We had great casting directors – Martin Ware and Ros Hubbard, and I remember when we first told them they kind of laughed and said, “Well hey you never know – let’s just try it.”

It must have been a day later that we heard from his agent saying that he absolutely loved it, and he had read it that evening. We literally had the offer out to him the next day. Everything from that point onwards just became very, very exciting, and it was much easier casting the other parts because we knew that we had the biggest star already secured. Then we managed to get Finn and Emily who are both rising stars, and are absolutely great in accompanying Robert in this film. But for us to have him was just a dream come true, and I still can’t believe it.

The film strikes an effective balance onscreen with its young cast versus the veteran actor – the young blood versus the old blood as it were.

Well this it and change is ongoing. But we have to go with it; there’s nothing we can do; there’s no point being against it at the same time, and it’s not about that. I think yes we need to move forward but also give a nod to old cinema and just appreciate it.

Watching the film, the use of the themes and melodies to create an emotional pull on the audience places the music as the beating heart of the film.

The composer Richard Bodgers is phenomenal, and he really embraced the film. I remember when he first started, he sent us these themes and little pieces right away, and we were just brown away with where it was heading. He worked with Phil quite closely on fine tuning the entire score, which is very prominent. While some people could say there is too much music, we were very happy with because we wanted it to be an integral part. As it is set in one location there needs to be much more to it in order to make it that much more atmospheric, and the lighting and the music are such key elements to this.

The film plays on the importance of the projected aspect ratio and how they are their own organic entity rather than just a means to pass time, and as such deserve a lot more time, consideration and affection from both the audience and the storyteller.

Both Phil and I love watching films in the cinema, and we become infuriated by the disrespect around us. A lot of the time some people aren’t even paying attention, and there is a great line in the film when Stuart comments on the aspect ratio of the film, and how no one really cares if the aspect ratio is right or wrong. It can happen in a digital multiplex where you just literally need to press a button.

When I was at Fox I had a lot of dealings with independent cinemas where people would go out of business because they couldn’t afford a digital projector. So that story was really close to my heart because I knew a lot of those projectionists, and a lot of the cinema owners that really struggled with embracing the digital advancement. As great as the quality and such, there is something that is lost, and I think the film beautifully shows that there is tragedy within it of what’s happening to the cinema itself.

So I love the side of the story that embraces the art of 35mm projection, a job that the character Stuart himself loved. There was a projectionist who helped us on set when we were working with an old 35mm projector who happened to be one of the people who had just lost his job, because the cinema where he worked was going digital that next month. So he knew that imminently he will have lost the job he’d been doing for about forty five years. It is just incredible the amount of stories we could be telling, and I’m glad we managed to incorporate that into the film.