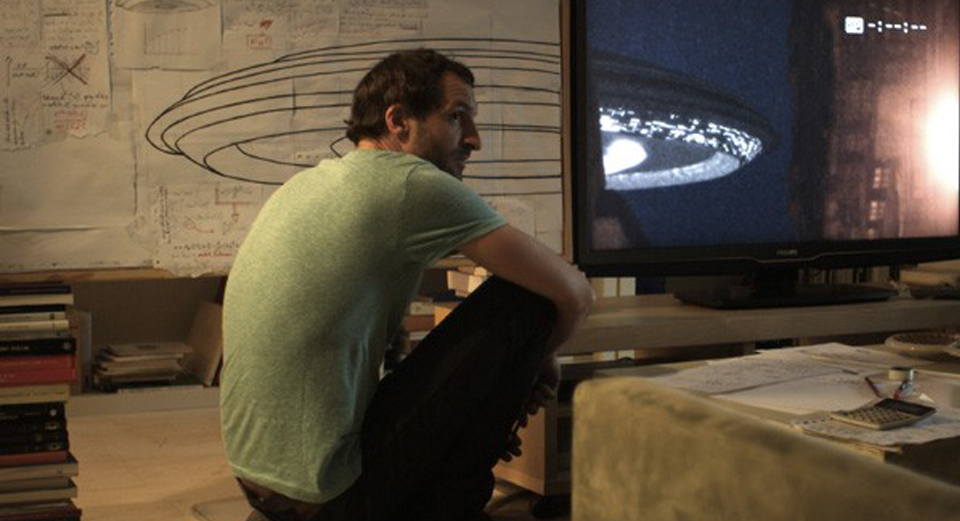 Waking up to find a giant Extraterrestrial ship hovering overhead and the streets deserted sounds like a nightmare, but Nacho Vigarondo peered behind the smokescreen to discover the humour in the dark premise.

At this year’s FrightFest a little genre romance number with an Extraterrestrial flavour found its way into the Discovery Screen. The habitual behaviour when Extraterrestrial ships appear is panic or in the case of Roland Emmerich stuff gets blown up with high heroics, patriotic speeches and the world sitting, twiddling its thumbs until the American’s are ready to ride into battle. But Nacho Vigalondo’s Extraterrestrial is the antithesis of big explosive sci-fi action cinema, taking the shape of an intimate comedy where apart from a few explosions and a little effects work, it’s the reclusive relative of its more bashful cousins.

Alongside the thrill ride Open Windows whose visual aesthetic has been undermined by the saturation of poor point of view genre cinema made through fiscal rather that creative integrity, Extraterrestrial is another captivating beast that prowls Vigalondo’s cinematic landscape.

Open Windows and Extraterrestrial are both infused with the accustomed natural charm that Vigalondo weaves into the fabric of his films. Whether it is an illusion there is an abundant energy to his films, and seemingly no matter the shadows that haunt the material, there is a glimmer of light; a touch of comedy within the proceedings that remind us that his cinema is entertainment, created for our enjoyment and pleasure.

At heart a situational comedy that becomes an ill-fated love story, the Extraterrestrial ship amusingly plays the role of a supporting non-human player – an excuse to keep the characters secluded in the apartment or at least in each other’s company as the drama of a secretive love triangle unfolds. Humorously unbeknownst to one third of the trio it becomes a source of comical angst that presents an opportunity for Vigalondo to darken his sci-fi comedy, as Julia (Michelle Jenner) and Julio (Julián Villagrán) fear Carlos (Raúl Cimas) finding out about their tryst, a well-balanced and orchestrated moment where the film teeters between darkness and light, and propels the film for the next stretch of its journey.

In contrast to Open Windows’ fast paced joy ride through suspense and action, peppered with an intriguing visual aesthetic that enhanced its theme of voyeurism, Extraterrestrial is a charming little number. Cinema is not necessarily about crafting a complex plot or web of machinations, as a small cast of characters within the intimate structure can be equally effective. The method Vigalondo employs with Extraterrestrial is to allow his characters to rebound off of one another, to reveal the complicated web of secrets, deceit, good and ill intentions that as few as four characters can weave amongst themselves to create an entertaining and humorous yarn

The absence of high drama will detract from Extraterrestrial’s appeal for some, which should not be taken as a suggestion that it is without a mild and measured dose of suspense or paranoia; expertly handled to offset the comedy to give the film the legs to make it to the finishing line. If Open Windows has a tendency to return to the voyeuristic thread, then Extraterrestrial is only ever a short step away from comedy warmth, and even one dare say a touch of sentimentality.