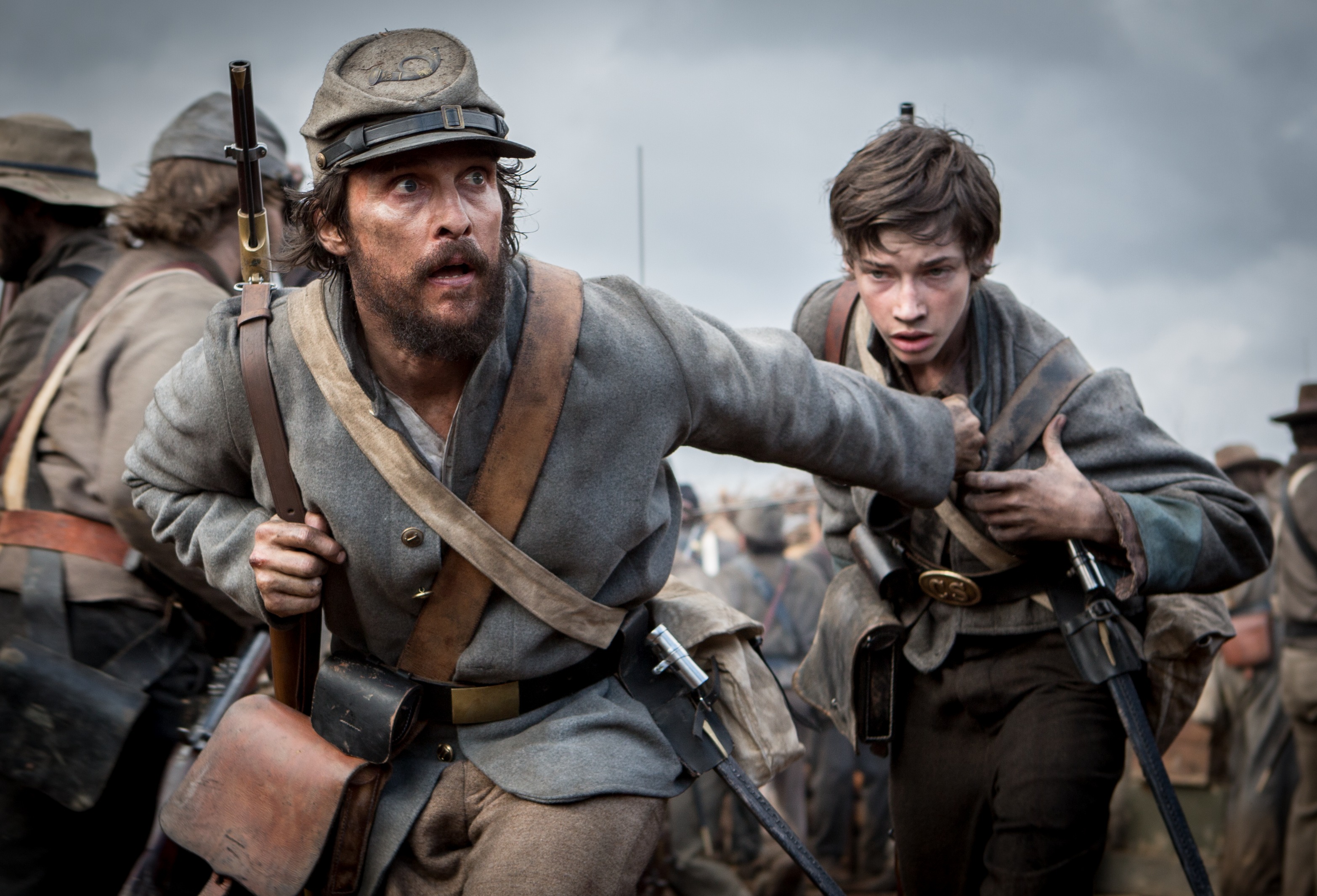 Filmmaker Gary Ross has a tendency to deliver consistently solid work but as an artist he is far from prolific. Ross hadn’t called action on a film since The Hunger Games in 2012 and before that it was Seabiscuit back in 2003. But his work has always resounded as solid and with essence. For his latest, Ross recruits Matthew McConaughey and guides another great performance from the powerhouse actor in a terse and touching Civil War set drama.

Set in 1862, the story starts with Southern farmer and Confederate Army deserter Newton Knight (McConaughey), steering a young boy through a blood-drenched battle where fixed bayonets pop skulls in bullet storms and pigs chow down on human remains. It’s bloody, atmospheric and sets an initially suitable yet misleading tone for the stirring drama to follow. Newton deserts his comrades and journeys to Jones County, Mississippi where he meets the mother of a child whose life he failed to save in the war. Newton befriends the mother and defends her surviving family against a gaggle of corrupt tax collectors, and subsequently forms a mercenary alliance/political uprising against the crooked Confederate government.

Aside from perfecting the art of exuding menace, McConaughey is sensational as Newton Knight. His ability to mine and slyly relay complex emotions is an art which gilds Free State of Jones with a whack of humanity amidst the historical drama, broken politics and battle based bloodshed. A comrade attempts to comfort Newton with token military mantra “the boy died with honour”, Newton replies “No, he just died”. It is this slight but significant moment which serves as the catalyst for his character’s evolution. Nuances and scraps of dialogue garnish the characters and story which charts Jones’ uprising, spliced with scenes from a court room set eighty five years later which sees a man stand trial for the crime of marrying a “negro” woman, in the very same room they wedded. This subplot’s synergy with the central storyline is neither too jarring nor overly commanding but serves a grander purpose in retrospect. Plot strands entwine accordingly while supporting characters augment the conflict with clout and understanding. The historical context/plot backdrop provides underlying facets which also augment and inform the setting along with excellent, fitting costumes, locations and set designs.

On occasion, Free State of Jones feels unwieldy due to dialogue heavy scenes which explore the characters but fail to drive the narrative. The harrowing political horrors and issues of hierarchal racism ensure Ross’ film was never meant to be an easy watch but it’s an important and powerful political statement as much as a deeply human drama. The last act, set one year after the emancipation proclamation, goes on to chart a change in the law under President Johnson alongside a Jones County Union league demonstration and FSOJ ultimately resounds as a profound and stirring account. Ross tells his tale of soaring drama to rivet and captivate as much as inform. Excellent action/ battle sequences/ tense scrapes are secondary to the embellishing themes but the action resonates also due to its genius crafting.

McConaughey conjures, and Ross extracts, a haunted and complex performance, honed with dexterity, restraint and relayed with finesse. A scene featuring Newton shooting the iron neck brace from a slave then fighting the officers drawn to the gun blast, is also enthralling. It’s moments like this which also make Free State of Jones such an important and powerful political war drama decked with staggering acting and stunning cinematography.