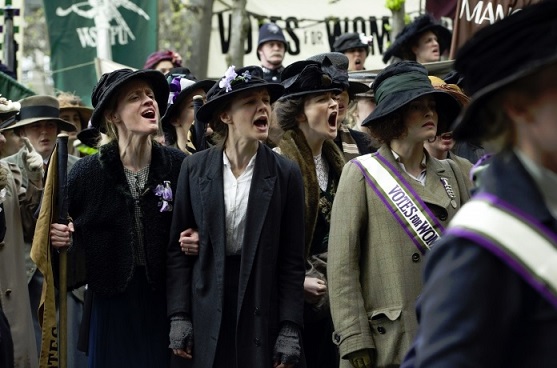 Eight years ago, Sarah Gavron gained recognition at the BAFTAs with a nomination for Most Promising Newcomer for her feature debut, Brick Lane. This year she returns with her anticipated follow-up, Suffragette.

Telling the story of the women’s suffrage movement in the UK, the film centres on Carey Mulligan as a fiery young foot soldier who is among those radicalised and turned to violence when she sees peaceful protests are getting them nowhere.

The long-gestating project is finally on course to arrive later this year, and now the first teaser trailer has been launched.

SUFFRAGETTE is a thrilling drama that tracks the story of the foot soldiers of the early feminist movement, women who were forced underground to pursue a dangerous game of cat and mouse with an increasingly brutal State. These women were not primarily from the genteel educated classes, they were working women who had seen peaceful protest achieve nothing. Radicalized and turning to violence as the only route to change, they were willing to lose everything in their fight for equality – their jobs, their homes, their children and their lives. MAUD (Carey Mulligan) was one such foot soldier. The story of her fight for dignity is as gripping and visceral as any thriller, it is also heart-breaking and inspirational.

Gavron reunites here with Brick Lane scribe Abi Morgan, who has since gained much recognition for her work writing the likes of Shame, The Iron Lady, and her Emmy-winning work on the series she created, The Hour. Needless to say, this could definitely be heading to the Oscars and BAFTAs this time next year.

Suffragette is set to be released in the UK on 11th September.

The Split Season 3 – the cast talk about shocks, surprises and what’s new in Abi Morgan’s drama

Trailer drops for third and final season of ‘The Split’