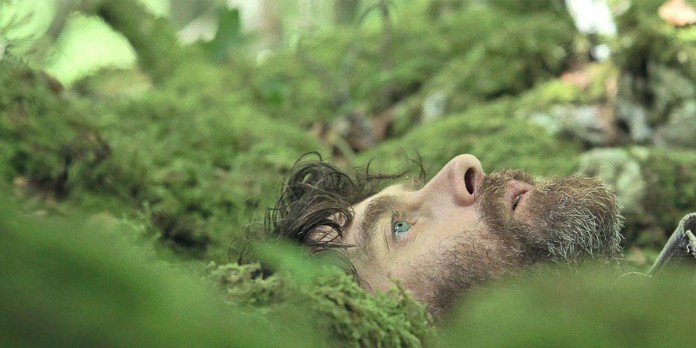 From the very moment you see a helpless rabbit being slapped against the side of a tree to ensure it’s dead, in the opening few seconds, you know exactly what’s in store when settling down to indulge in Tom Geens’ sophomore endeavour, Couple in a Hole. The title can be taken as being one of two things; a metaphor for a relationship that’s in a bad place, with two one-time lovers now suffocated by their own sense of togetherness. Or it could be a literal meaning, of two people actually in a hole. This film, however, is both of those things combined.

Set in a vast, unforgiving forest in the French Pyrenees, we meet John (Paul Higgins) and Karen (Kate Dickie), a Scottish couple living off the land, killing for food, and sleeping in a cave-like trench. When the latter falls after being bitten by a poisonous snake, John makes a rare deviation into civilisation to purchase some medicine. It is there he meets the local Andre (Jérome Kircher) who insists on helping them, and providing food and shelter. Though his wife Celine (Corrine Masiero) resents his involvement, it transpires that John does too, and while enjoying his new friend’s company, he maintains his, and Karen’s desire to survive on their own.

We spend large quantities of the feature – the entire opening hour, in fact – attempting to figure out why this couple live the way they do, and how they ended up in France, as we’re given such limited context and back-story, as Geens ensures this feature poses far more questions than it gives answers. Much of the intriguing elements derive from the assistance by Andre, and why he has become so obsessed with lending a hand, as we start to realise that perhaps his participation is as cathartic to him, as this natural, free-spirited way of living is for the primary couple. The film has such an indelible atmosphere too, helped along by the impressive score, with influences from the likes of Joy Division and Radiohead prevalent.

Couple in a Hole studies our relationship with the land we inhabit, in a similar vein to what we have seen recently in The Witch and The Survivalist – proving that you simply do not need huge budgets to make movies and tell compelling stories that are provocative and absorbing. Nope, instead you just need a landowner’s permission to shoot a movie in their back garden – and you’re good to go.