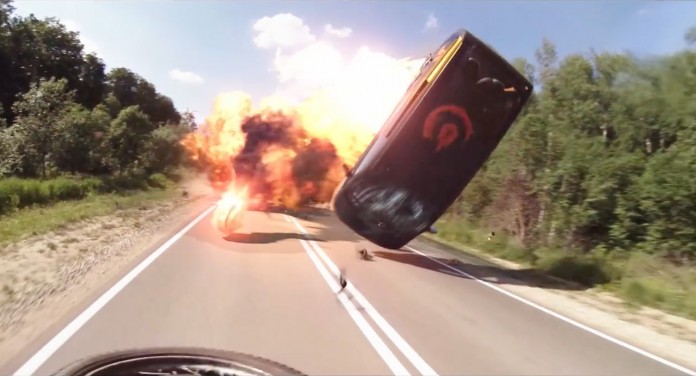 Ilya Naishuller’s Hardcore Henry is a film for the video game generation, in what is effectively a first person shooter fully realised on the silver screen. Except this title comes without the one key factor which makes video games so compelling, immersive and riotously good fun; control. It’s one thing adopting the perspective of the eponymous protagonist, but without the ability to manipulate his actions, it feels somewhat restrictive.

Henry – a character we embody and yet never see – is resurrected from his deathbed by his adoring wife Estelle (Haley Bennett), using advanced technology to allow him a second chance in life, with robotic limbs and super strength. As such he becomes the target of the tyrannical and barbaric scientist Akan (Danila Kozlovsky), who is determined to kill Henry. On the run, with nobody to trust given his memory has been completed wiped (with only a brief flashback to childhood with his father, played by Tim Roth), Henry finds himself consistently saved by the eccentric Brit Jimmy (Sharlto Copley), who keeps coming to the rescue. Henry has no idea who his saviour may be, nor, for that matter, who he even is himself.

This creatively inclined endeavour thrives off its gimmick (of seeing everything through Henry’s eyes) but it’s one that grows tedious as we progress. When acclimatising ourselves to this unique perspective it’s enjoyable, like an immensely violent episode of Peep Show, but once the gimmick has run its course and worn thin, we’re reliant on having a story we can abide by and invest in, and that’s simply not the case. You become embroiled in the pulsating irreverence of it all, as an unrelenting picture that pulls no punches – but there simply isn’t the strength in the narrative to compensate.

The picture is incredibly violent and overstated in its conviction, deliberately so, to a point where it becomes so surreal and savage, it distances itself from reality, which allows for it to flourish as a piece of cinema, and not attempt to send any sort of message. This also highlights the line between video games and real life too, which is an essential marker to put down given the parallels drawn from scapegoating media, conveying just how absurd and fantastical these games can be once you’ve seen them played out in the context of a live action world we recognise and know.

Some of the more compelling sequences are when we almost take on the form of a theme park simulator, be it when Henry jumps out of a plane, or when he climbs up a building, footage that places us in the moment – but there simply isn’t enough of them, instead we opt for mindless, monotonous shoot-outs. While such scenes take us back to the electric adrenaline of The Raid, which is equally as unrelenting a feature – the Indonesian action thriller revelled in its simplicity, something Hardcore Henry is distinctly devoid of. Not to mention the fact we were marvelling, open-mouthed, at the breathtaking use of martial arts in that film – and no matter how impressive the set pieces may be in Hardcore Henry, it’s never quite as striking and awe-inspiring when dealing with guns.