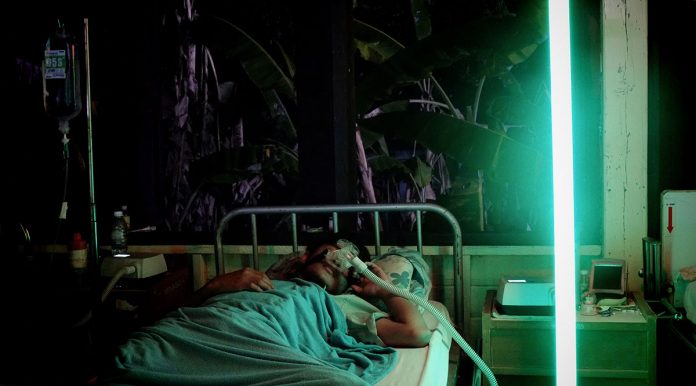 Apichatpong Weerasethakul’s Cemetery of Splendour is a fantastical and meandering exploration of the blurred boundaries between dreams and reality in a small, rural town in Thailand. Set in a newly-formed hospital in the grounds of an old school, the film centres around disabled housewife and volunteer, Jenjira (Jenjira Pongpas), and her burgeoning relationships with the new people in her life. The hospital has recently admitted soldiers that have been afflicted with a mysterious sleeping sickness. A variety of experimental therapies are conducted to reduce the severity of the soldiers’ troubling nightmares, the most effective of which seems to be a colour-changing tube of light set up beside each bed.

A young medium, Keng (Jarinpattra Rueangram), eventually reveals that the soldiers are having their energy sapped by ancient spirits fighting an endless war in another dimension which exists in the same space as the hospital. This fascinating idea is never developed beyond the characters simply stating it as fact. It seems a waste of such a creative plot point to leave it unexplored.

The scenes of the film flow from the mundane to the surreal without missing a beat. In one particularly bizarre sequence, we see a group of people watching a generic horror film in a cinema. After it finishes, we are shown a number seemingly unconnected shots. As the camera lingers over these scenes, the lighting slowly morphs colours, transforming the mood of the captured moment. We stay with each just long enough that we are able to explore the whole frame. With nothing in particular drawing focus, new details slowly emerge. It’s an experience more akin to observing a series of paintings than it is to watching a film.

The surrealist nature of Cemetery of Splendour makes for potentially inaccessible cinema. It’s possible that Weerasethakul’s work could alienate viewers who are unfamiliar with his unique brand of filmmaking. It’s difficult to really pin down the plot of the film and the cinematography can make it a challenge to connect with the characters. Almost every shot is mid to long. There’s also very little in the way of background sound. With the near-constant hum of cicadas and the musical lilt of Thai dialogue, the film is incredibly relaxing and dream-like. At one point Jenjira expresses her concern that she may not be awake. Keng responds by telling her to open her eyes as wide as possible, which, if she’s really dreaming, will wake her up. You may find yourself following her advice along with Jen.

Cemetery of Splendour bizarre enough to keep an audience engaged, but viewers who aren’t already interested in this kind of experimental film could find the lack of clear narrative frustrating.