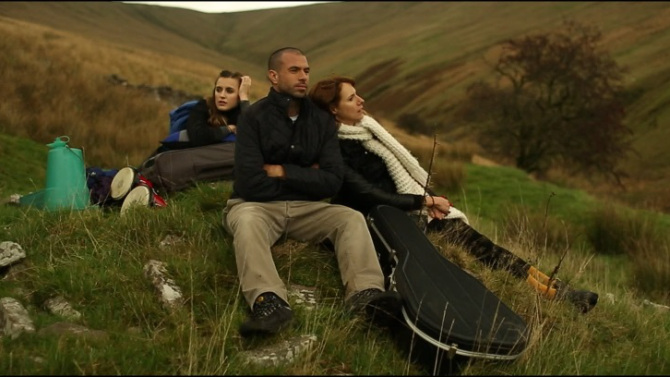 Jamie Adams’ latest film Black Mountain Poets plays at SXSW later this month, before hitting cinemas here in April. Telling the story of a hare-brained scheme gone madly wrong in which two criminal sisters steal a car, assume the identity of the owners and find themselves as celebrity poets at a rural retreat. We’ve all done it.

It’s a great set up, not least for the hilarious attempts at beat poetry we see in the trailer, but also for the fertile emotional ground Adams can build on.

Dolly Wells, from Adams’ previous Benny & Jolene, joins Weekend’s Tom Cullen and the ever-wonderful Alice Lowe as our main cast. It’s done very well on the festival circuit and seems to be the perfect antidote to the CG overload coming our way this summer.

The film is out on the 1st of April, here’s your trailer,

A comedy about getting back to where you once belonged!

Two professional con artist sisters Lisa and Claire go on the run after being caught trying to steal a JCB. They decide to lie low by assuming the identities of the owners of their escape vehicle and become The Wilding Sisters, guest stars of the Poet’s Poetry Society retreat in the depths of the Black Mountains. Thinking this will be an easy task, they don’t count on the presence of handsome poet Richard and his jealous girlfriend Louise. Competing for a large cash prize, the two sisters are forced to confront not only their relationship but also their place in the world. Can they survive the competition and learn to appreciate the powerful beauty of the Black Mountains?