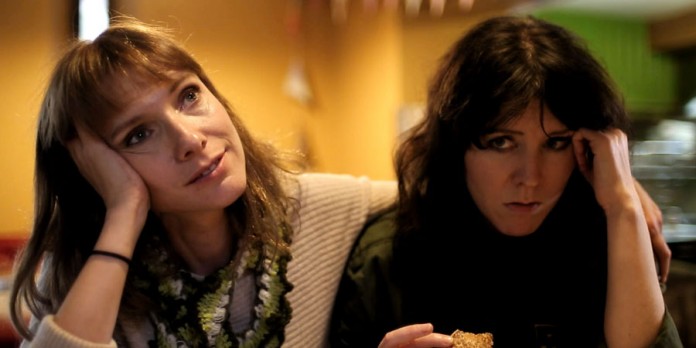 There are few environments quite as rife for ridicule than improvised, spoken word poetry gatherings – and it is here that writer/director Jamie Adams has set his latest, and third endeavour, Black Mountain Poets. But this comedically inclined piece is by no means poking fun at any such community, as we’re surrounded by endearing creations, laughing at the pretension on show in a somewhat affectionate manner.

Eccentric sisters Lisa (Alice Lowe) and Claire (Dolly Wells) just about manage to get by, beg, stealing and borrowing their way around life, thriving in the notion of spontaneity, as firm believers of the ‘wherever the wind blows’ ideal. When running from the police after being caught attempting to break in to a building site, they’re at a loss when caught in the middle of the country without any petrol. So they do what they are best at; they wing it, and steal a car, which belongs to renowned poets ‘The Wilding Sisters’.

With an invitation to a poetry retreat, they decide to assume the identities of the sisters who can no longer make it (now stranded and car-less in the middle of nowhere) and turn up, greeted by a collection of ardent followers of their work. Over the course of the next few days, where they are camping in the Black Mountains of Wales, they maintain their lie, which becomes somewhat more difficult when Claire takes a liking to fellow (and genuine) wordsmith, Richard (Tom Cullen).

In a similar vein to Adam’s preceding endeavours Benny & Jolene and A Wonderful Christmas Time, the filmmaker has remained faithful to his commitment to realism, shot almost as though a documentary, and yet thrives in the small quirks in life, offering a heightened, overstated take on reality, without ever compromising his naturalistic approach. Instead he finds a compatible balance between the two, similar in many regards to Peep Show – ridiculing life while stringently reflecting it, showing off a real talent and consistency, given how tonally similar this picture is to what came before.

It remains gloriously, and endearingly low-key in regards to the narrative. So many filmmakers would have upped the stakes, and had the protagonists entering in to a televised poetry convention, where the award for the best performance grants the winner a million pounds. But not in this case; the reward is a grand, and the retreat consists of around eight people, and the performances take place in a small gazebo in what appears to be somebody’s back garden. It is here the film generates its distinct amiability, and though somewhat light and undemanding in its conviction, it never once loses that charm which ensures the viewer remains onside throughout.