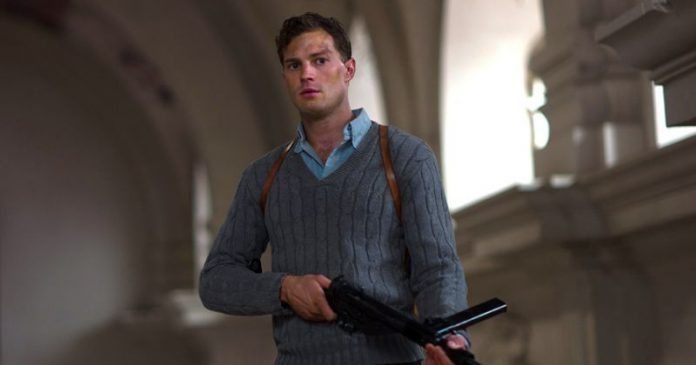 While Tarantino mercilessly left his camera lingering on the face of Adolf Hitler as bullets penetrated his skull, this fictionalised, fantasy sequence is of course completely false. But that’s not to say real-life assassinations of high-ranking Nazi officers weren’t devised, and the most high-profile of which was that of SS General Reinhard Heydrich, otherwise known as ‘The Butcher of Prague’ – and Sean Ellis’ Anthropoid depicts this remarkable set of events.

Heydrich was the third in command – after Hitler and Himmler – and operation Anthropoid was quite simple; for him to be killed. The responsibility was with self-exiled solders, the Czech Jan Kubis (Jamie Dornan) and Slovakian Josef Gabcik (Cillian Murphy). Though informed of the consequences if they see their mission through, which could spark a retaliation that results in many lives lost – the sheer courage of the duo inspires those around them, and with the assistance of Uncle Hajsky (Toby Jones), they are put up in a small apartment, counting down the days until it’s time to attempt the most ambitious assassination during the ongoing war.

Ellis’s foray back into the English language following his breathtaking drama Metro Manila, makes for a remarkably immersive cinematic experience. Even during the early stages when the leading duo are hiding, bored as time ticks painfully on, it infects the viewer and tedium takes over, and while usually that’s not exactly a pleasant sensation when indulging in a movie, it feels fitting in this instance. The immersion does eventually become far more appealing however, as when the action begins Ellis utilises a handheld camera technique, adding to the haphazard nature of a crossfire, and the the way he uses close-ups ensure that the viewer is placed right in the middle of the scene, at the heart of the conflict.

There’s always an inevitable feeling of suspense that derives from any film set during this era that pits heroes against the Nazi regime, and this enriches the audience’s involvement. Whether it be Jews or rebels, they’re always hiding and in turn, so are we. Ellis ensures the film becomes unrelenting in its approach too as we reach the climax, as the sound of gun shots is deafening, and you leave the cinema with it ringing in your ears, taking it all the way home with you. On a more negative note, however, the authenticity does come into question where this film is concerned, feeling at times a little overt in its drama, perhaps not quite naturalistic enough. What doesn’t help matters are the use of British and Irish actors putting on accents, and while they’re commendable in their execution, if you take Ellis’s preceding endeavour Metro Manila, one of the great aspects was how the director didn’t appear to pander to an international market, not once compromising on the realism at hand, and ensuring that it felt authentic in its environment and of the culture being depicted, which sadly can’t be said of this offering.

But where Anthropoid excels most prominently is within the absorbing narrative. We see countless WW2 movies on the silver screen, and yet more often than not they’re from a German or British perspective, and occasionally French and Russian. But now we’re diving into this tragic, devastating period of time from a Czech point of view, serving as a reminder than the whole of Europe was engulfed in this devastating war, going through it together.