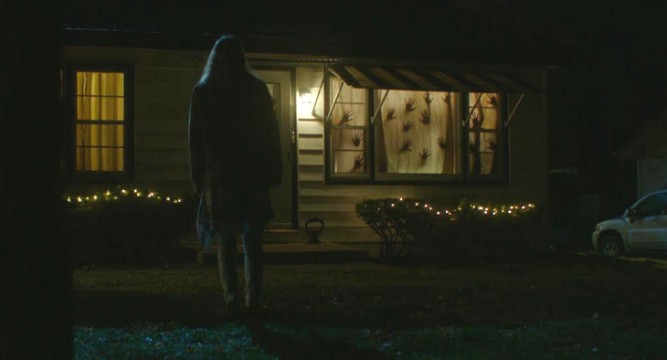 The horror genre has harboured countless paranormal thrillers about troubled teens/ children (and their rotten antics) over the years. Some made an impact while others swiftly faded from memory due to being mostly hackneyed or cumbersome. From obvious classics like The Shining, The Exorcist and Carrie to lesser thrillers, Audrey Rose, The Exorcism of Emily Rose, The Child, The Brood and Communion. The sub-genre houses a wealth of capricious productions. It’s latest, Anguish, is a botched and onerous schlep through well-trampled territory. It’s a gawky supernatural blunder that promptly establishes a stark, misty mood by way of some emo/goth imagery and twisted sound design,. Then nagging the subconscious like a noxious migraine with a story that wilts to a plod before keeling over completely.

While being driven by her distracted mother Sarah (Karina Logue), moping teen Lucy (Amberley Gridley) asks if she can go away on a camping weekend with her friends. Sarah declines, citing Lucy’s rowdy companions as the reason for her decision. Lucy then swiftly storms from the vehicle in an abominable huff, straight into the path of a passing car. A few weeks later we meet Tess (Ryan Simpkins): another troubled teen flecked with medication, self-doubt and abstract complexities due to her absent parents and isolated spats of self-loathing. Tess’ mother, Jessica (Annika Marks), works long hours, while her father skypes from overseas due to his military role/ engagement. But concern for their daughter increases when Tess claims to be able to communicate with the dead, and may be possessed by the spirit of a recently departed local girl (Lucy).

Debut director Sonny Mallhi delivers a scare-free, histrionic and crushingly glum “possession” thriller with stale psycho-drama facets. Anguish features a surprisingly gripping lead performance from Ryan Simpkins as the emotionally fractured Tess but the captivating acting is crippled by a surfeit of visual chicanery, textbook genre traits and a story that judders from the outset before malfunctioning into a circuitous mess. The characters are mostly forgettable, despite being fashioned by decent supporting performances, while director Mallhi fails to conjure proficient or paralysing frights, the type of which are imperative for this kind of horror to function efficiently. Instead he resorts to dreary boo jumps that dirt so many modern genre efforts while tamping plot substance with asphyxiating visuals.

Anguish spends too much time trying to probe the protagonist’s mind-set and convey what she is feeling to help govern the mood instead of ameliorating the story. A few memorable moments make an impact: hand prints on a living room window and Lucy’s sudden death are particularly powerful, but Anguish wafts through the memory like a passing after-thought before evaporating completely.

This type of horror film should leave a lasting impression but Anguish languishes lost and anxious in sub-genre limbo, unsure as to whether it wants to be a bland psychological thriller or a botched supernatural horror. Unfortunately it plays like a TV movie amalgam of both: a defective hybrid watched begrudgingly through clasped hands and an apocalyptic hangover.