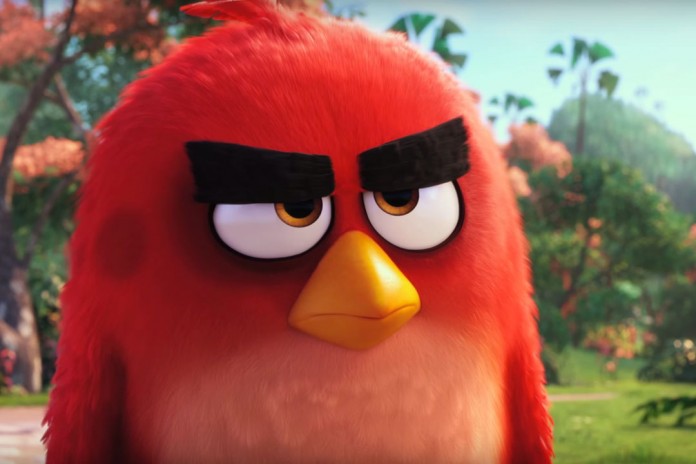 When using your index finger to flick back a rather resentful looking red bird on a catapult, into a sea of green pigs lazing around on unstable wooden structures – you couldn’t be blamed if you were unable to figure out exactly where the premise for a feature length movie might come from. Merchandise was sold, special editions of the Angry Birds smartphone app were released – but the prospect of a narrative is contrived and superfluous. The cash-cow that is The Angry Birds Movie sadly proves this to be the case, never once transcending expectations, and instead perpetuating our initial apprehensions related to the project.

Red (Jason Sudeikis) is pissed off. Fed up with the idealistic community, the monotonous repetition of life, and the fact he, like all of the other birds that inhabit this island, are flightless. Bullied from a young age for having quite striking eyebrows, the pent up anger within him is finally released when insulted by a parent at a children’s birthday party. The tirade that ensues lands him the worst punishment available; anger management classes.

Though befriending the other attendees, Chuck (Josh Gad) and Bomb (Danny McBride), Red still struggles to convince the rest of the island that the green pigs, who had recently arrived on the island, have nefarious intentions. Red is left to take down the manipulative leader Leonard (Bill Hader) just as he always has done; on his own.

There isn’t an awful amount of scope to craft a narrative that seems fitting from the immensely popular app, and evidently filmmakers Clay Kaytis and Fergal Reilly, alongside writer Jon Vitti, were aware of that fact as they merely use the basis of having an angry, flightless bird as their protagonist, to then invent a whole world in accordance with that. It’s during the first act when the film thrives too, when comparisons to the original game are merely in the aesthetic, but as they attempt to shoehorn in the actions from within the game, it’s when this title becomes unbearably tedious. It feels so forced in its inclusion, as you can’t help but question why on earth a whole island of birds deemed it necessary to fling themselves into a town of pigs. Wouldn’t a fireball be more appropriate?

It’s a shame the film loses its way so dramatically, as when Red is navigating his way around the island, we have the archetypal story of the underdog which is easy to invest in, while his cynicism is amusing, as he seems to take offence at any innocuous thing, becoming increasingly annoyed while others around him remain blissfully optimistic. Through this comes an array of jokes that will appeal to adult audiences, though regrettably the plot holes in this narrative will be enough to force the parents away, leaving only the kids – who will be marvelling at the vibrant colours and the images of birds being flung at buildings – with any semblance of appreciation for this tale.

Nonetheless, Kaytis and Reilly have done well in creating a world with its own set of rules that remains easy to invest in and immerse ourselves in, which is often one of the hardest challenges to overcome. But the film loses its way, working so much better when merely inspired by the game its based upon, rather than the seemingly mandatory attempt to mimic it.