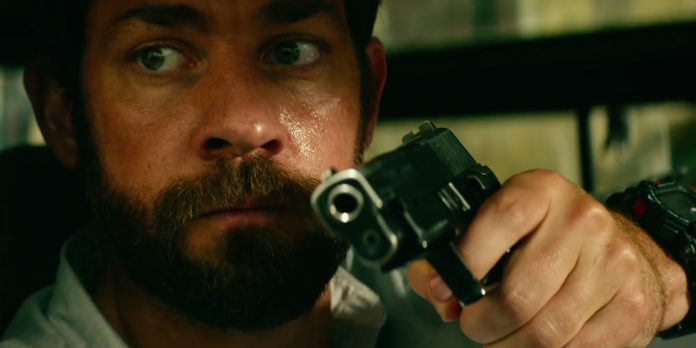 Any movie depicting war and conflict, is enriched by viewing both sides. No matter how reprehensible you may view the antagonists to be, a balanced, impartial account makes for more thrilling cinema, not to mention the intrigue in attempting to comprehend the opposition’s motives, where possible. However in Michael Bay’s latest, 13 Hours – studying the fateful attack in Benghazi, Libya on September 11th 2012 on an American compound – the attackers are merely nondescript, faceless villains. One character claims that anybody who approaches their building is “bad until they’re not” and it seems Bay has taken a similar approach himself.

Our story focuses primarily on Jack (John Krasinski) and Rone (James Badge Dale), stationed in Benghazi to help restore order to a community that had only recently rid themselves of the tyrannical dictator Gaddafi. Missing their families back home, along with fellow contractors Tanto (Pablo Schreiber), Oz (Max Martini), Boon (David Denman) and Tig (Dominic Fumusa) they find themselves fighting for their lives, when countless locals attack their compound, where they are heavily outnumbered and in desperate need of back-up.

While Bay focuses his entire energy on the American characters (there isn’t a single substantial character from the ‘other side’ featured in this movie) – even then, we’re left with figures not fully realised on screen, without the sufficient back-story to ensure we feel emotionally connected to them. There isn’t a stand-out protagonist as such, one respective journey for us to go on – and the film suffers from this lack of focus. However, in spite of the flaws of the opening act, the second half is unrelenting in its approach even if the battle sequences can be somewhat perplexing at times. While appreciating Bay’s inclination to make this a haphazard, immersive war-zone, it suffers in the way Everest did too – where you struggle to differentiate between characters given they’re all wearing headgear and all seem to have facial hair.

Bay evidently can’t lose sight of his inherent inclination for pure entertainment either. Affectionately grandiose and revelling in the notion of overstatement, that’s a technique which lends itself to films featuring ginormous robots, and even in Pain & Gain, which was also based on a true story, the frivolity and exaggerated nature of it all worked to the film’s advantage. But 13 Hours requires a more raw, naturalistic and human approach, and Bay struggles to deliver.

The film doesn’t seem to take any risks either, presented in an all too generic manner. The music used, and even the typewriter font picked to show the time of the day, we’ve seen it all before. That said, the finale is touching in parts, as Bay manages to remain on the right side of sentimentality. Just.