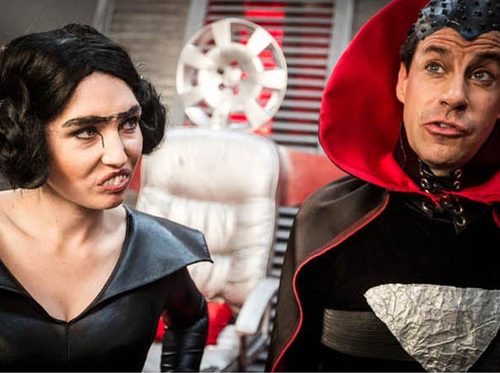 The directorial debut of successful New Zealand artist Christian Nicolson, This Giant Papier Mache Boulder Is Actually Really Heavy is a delightfully zany independent sci-fi comedy. The film centres around three friends (Christian Nicolson, Daniel Pujol and Lewis Roscoe) who, after being coaxed into attending a local sci-fi convention, are sucked into a parallel universe that appears as a 1960s sci-fi B movie. Cue lots of tin foil and curling irons disguised as laser-firing guns. After narrowly escaping a run-in with the campy and short-tempered villain Lord Froth (Joseph Wycoff) they are joined by “not a space-princess” Emmanor (Sez Niederer) and devise a slapdash plan to find their way home.

The film is a mash-up of references and homages to classic science-fiction moments across many beloved films and TV series. The name itself actually refers to a scene from the original Star Trek series in which Captain Kirk throws around a suspiciously light and bouncy boulder on an alien planet. In Boulder, (as it’s known for short), planets are papier-mache balls on strings with newsprint showing through their shoddy paint jobs, aliens are made of latex and wire mesh, and robots are men dressed in little more than cardboard boxes. It’s all a carefully constructed throwback to when sci-fi was just finding its feet and the creativity and ingenuity of filmmakers were pushed to their limits.

Hardcore sci-fi fans will undoubtedly love the film’s aesthetic and its reverence for all that has come before it, but there’s something for everyone in Boulder. The main highlight being the dry humour with which the film’s displaced New Zealanders handle their out-of-this-world adventure. It’s clear that the humour was influenced by irreverent British comedy television shows like Monty Python and there’s also a shade of The Mighty Boosh in there – in that it’s entirely home-made and ultimately just friends having a great time living out their fantasies. The scene featuring a vengeful god, played by a giant superimposed Australian water dragon named Colin, chasing down a group of neanderthal-like aliens to the Benny Hill theme tune is the quintessential moment of this at play.

It would have been nice to see the villain and his bizarre band of followers fleshed out a little more; they could easily have been absolute scene-stealers. After all, everyone knows that sci-fi villains are often far more compelling than their heroic counterparts. Having said that, the film’s stars are more than able to carry this well-paced film. Made by fans for fans, Boulder is a fun space-romp that’s well worth checking out.