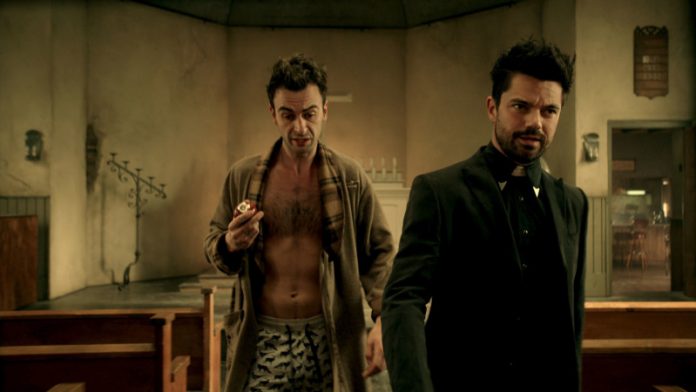 After last week’s disappointment ‘Monster Swamp’ is all about what Jesse (Dominic Cooper) plans to do next. He may not be about to unleash bloody vengeance but he’s also not staying put. Jesse plans to do something big at next Sunday Service and he wants the entire town there to see it. First though Preacher continues its mishmash of anarchic comedy and horror homage; opening with a young woman in her underwear being chased down by men in boiler suits. This is quickly revealed to be all fun and games though, Quinncannon boys armed with paintball guns. Turning deadly though when one of the girls is sucked down a sinkhole.

In the morning Jesse approaches Emily (Lucy Griffiths) to brainstorm on filling out the church, settling on a raffle. It feels like a minor and unnecessary detail, after all Jesse could just use the Word to get people into church. However he clearly wants people to have as much choice in their conversion as possible even if he has to resort to trickery to make it happen. This new sense of purpose also allows Cooper to lighten up his performance, giving Jesse a sense of ease that contrasts his previous frustration. Watching him in Preacher really feels like watching a good actor become increasingly at ease in his role.

On Cassidy’s end its back to dealing with Fiore (Tom Brooke) and DeBlanc (Anatol Yusef) who are growing increasingly impatient with the whole Genesis situation. Of course Cassidy (Joseph Gilgun) isn’t planning to make more than the most token effort to raise the issue with Jesse who has bigger things to worry about. Instead he’s going to see just how much he can exploit the angelic pair. It’s a funny scene and it does provide some insight into Genesis. If there is a downside it’s that Fiore and DeBlanc come across as increasingly ineffectual; alone, without Heaven’s knowledge and forced to sit on their hands.

We also get some insight into Jesse’s upbringing which will be another chance to enrage fans of the comic. Shown to be Annville’s previous pastor the elder Custer is presented as a strict and uncaring figure rather than the idealised contemporary cowboy of the graphic novels. Even forgetting the deviation from the source material these flashbacks offer nothing but confusion. Why would Jesse want to live up to the legacy of a man who publicly shamed him and cared only about his reputation in a tiny Texas town?

Thankfully the tale of the buried call girl actually gets some payoff when we return to Annville’s premier brothel for a service held in her memory and attended by Tulip (Ruth Negga). After everything Jesse’s pulled Tulip is in no mood for religious ceremony and lets the whorehouse know it. Her mood isn’t helped by the taunting of Clive, the idiot who chased the girl down. Abandoned and stuck in a town that treats women like animals she’s had enough and tries to take it out on Clive while he’s with a girl. Problem is she gets the wrong room and ends up throwing Cassidy out of a window. So not only are these two characters brought together but unlike Jesse, Tulip discovers that Cassidy really is a vampire after he raids a blood bank.

Odin Quinncannon also gets a more serious look in. Over the course of the series we’ve seen him at work, forcibly buying up local land and literally pissing on the local authority.  Now though Jesse brings him into his plan. The scene simmers with intensity that builds to a boil when Jesse really starts to impose on the old man. Cooper pulls back, saving the big guns for the final scene but you feel the certainty in his voice. He talks to Quinncannon about Judgement Day with the authority of a man who has seen real power.

When Sunday comes Cooper lets loose with judgement, condemning his entire congregation for turning away from God. He offers them salvation if only they agree to serve and the first he asks is Quinncannon. Quinncannon laughs it off, getting up to leave which is exactly what Jesse needs. It wouldn’t be enough to see the most powerful man in town make a token vow, they have to see him turn and when Jesse uses the Word he does indeed turn. A change comes over indicated by a ringing sound, a sound coming from a device in Fiore and DeBlanc’s possession; a message from Heaven.

Monster Swamp represents a turning point in Preacher. All of the principle players have triggered events much bigger than themselves. As always though these triggers only occur in the episodes final moments, leaving the subsequent episodes to provide the payoff. Overall this was a much more solid outing, a subdued episode with significant development for the main plot.

New trailer arrives for the fourth and final season of ‘Preacher’

Tom Hardy stars in new trailer for ‘Venom: Let There Be Carnage’