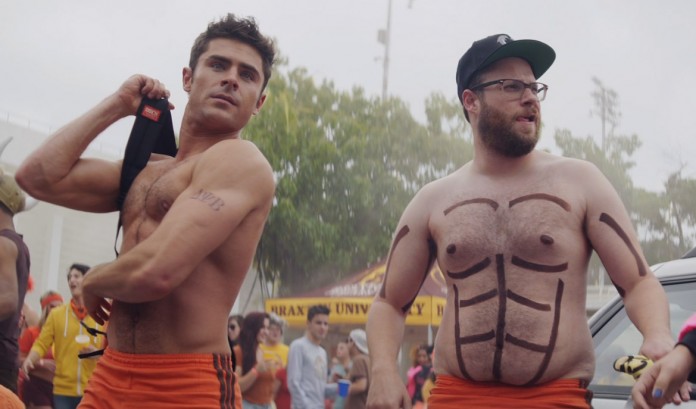 There’s a brand new trailer for generation-gap hedojism comedy Bad Neighbours (or just Neighbours for our US visitors) just arrived, so let’s extend our hand and welcome it across our threshold.

Castwise Seth Rogen, Zac Efron, Rose Byrne, Dave Franco are joined by newcomer Chloë Grace Moretz, along with Carla Gallo, Ike Barinholtz and Lisa Kudrow. Kudrow is always great to see on screen so her presence – even for a cameo – guarantees I’ll pop by and giving this new neighbour the once over. And Selena Gomez was spotted filming on set as well so it’s not too far a stretch to imagine the Spring Breakers star is popping up for a song or two.

The film is out here in the UK on the 6th of May.

Mac and Kelly’s struggle with their neighbours continues when a new sorority (led by Chloë Grace Moretz) moves in next door while the couple are in the midst of selling their home.

The Unbearable Weight Of Massive Talent – Lily Sheen, Tom Gormican & Kevin Etten on the inspiration that is Nicolas Cage