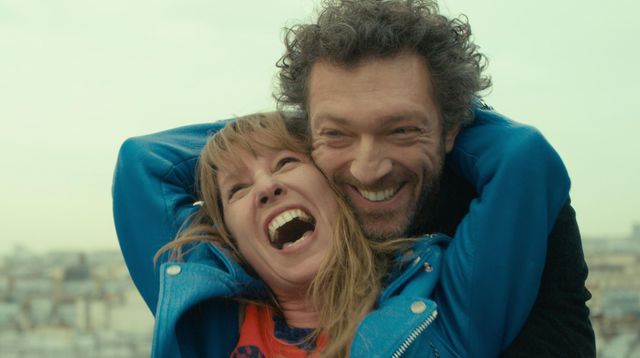 When first introduced to Emmanuelle Bercot’s Tony, in Maiwenn’s profound relationship drama Mon Roi, she is in rehabilitation for her knee, which she shattered in a skiing accident. Evidently suffering psychologically as well as physically, we learn that she has come out of a tumultuous relationship, and as she reflects back, we candidly explore it from its conception to its finality. It’s an interesting technique, as this remarkable endeavour follows the traditional beats of the romantic narrative of two people falling in love, except we’re equipped with the knowledge that there’s no happy ending, making for a foreboding experience, and turning all of the blissful memories into rather sour ones, in what can be described as this year’s Blue Valentine.

Tony meets Georgio (Vincent Cassel) at a bar, bewitched by his charm and endearingly insouciant outlook, she heads back to his apartment, enjoying breakfast with the restaurant owner, and thrilled when he proposes the idea of a second date. They fall intensely in love, marrying somewhat spontaneously, and having a child together soon after – but it’s during her pregnancy when the dynamic shifts, and not for the better. Georgio becomes committed to an ex-girlfriend who attempted suicide, and is seemingly unable to let go of the grip he has on his social life, even purchasing a flat nearby just for himself to get away. Eventually their relationship becomes too strained, but his persuasive, controlling manner makes it difficult for Tony to simply pack up and leave.

We see Tony in the early stages at her most vulnerable, bathing herself at the clinic when not completely able to, naked and crying. Instantly an intimate bond is formed between the viewer and the character and an emotional connection established – not to mention the fact that her physical incapabilities also work as a means of endearing her to us. From the offset she is put on the back foot, instantly conveying her fragility and imperfections. It’s a stunning lead performance from Bercot too, who captures the subtleties and nuances of the role, from being timid upon first meeting Georgio, to being drunk in love, to struggling with the hardships, to being exhausted and heartbroken, all with such sincerity. She goes through the motions, and in turn, so do we.

Cassel matches the actress at every turn, playing what appears to be the sort of character that only exists in cinema – as he’s so ineffably charismatic, and he pulls it off effortlessly. But we see his range as an actor too, as there’s something menacing behind his eyes, and suddenly he becomes a far more naturalistic, layered creation. He is manipulative in parts, vindictive in others – and uses that inherent charm to get his way, taking on the form of a tyrant.

But Maiwenn ensures he never becomes an overstated cliched villain – he remains too real for that to be the case. He’s not a nasty man, he just doesn’t think, he’s not compassionate. That’s not to say you like him at all, but conversely, he’s not an archetypal antagonist, which is imperative, as the film would be cheapened had he been. This film helps the more placid of us to understand how couples can find themselves in relationships such as this, to be so destructive and regress to a state of constant conflict and abuse. This film chronicles such a decline and allows us to understand how it can happen, helped along tremendously by the chemistry between the leading pair, which is s palpable during both the good times, and the bad.

Wonderfully structured, the way we weave between the present day and the past is seamless and ensures we remain absorbed throughout. That said, the metaphor during the scenes in the present day are somewhat contrived, the idea of Tony trying to mend her broken knee is symbolic of her own status in life; she has taken quite a knock and is now trying to get back on her feet and start again. “I’m still limping, but happy to be walking again”, she says. We get it.