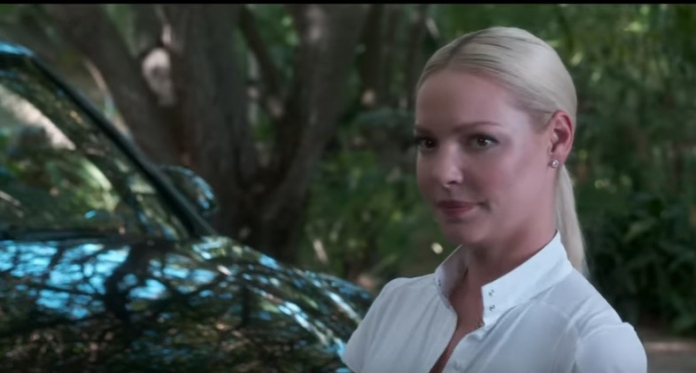 Katherine Heigl may have the face of an innocent angel, one that lures you into a false sense of security, so once you see her in her new role as a bit of a psycho in the trailer and poster for Unforgettable you may not look at her in the same way ever again.

This dramatic thriller is veteran producer Denise Di Novi’s (Crazy, Stupid, Love, Focus) first time in the director’s chair but it sees her reunite with Heigl who both worked on  Life as We Know It back in 2010. Heigl, who was last seen back in 2015 in Jenny’s Wedding and TV series State of Affairs seems to want to shake off being typecast in the romantic comedies and sink her teeth into something a little less saccharine and full blown bitter and twisted. It’s funny how a lot of thrillers that venture down the road of jealousy always show women as the mentally disturbed party….

Joining Heigl in the cast is Rosario Dawson (the Sin City films) as her ex-husband’s new partner who is in for one hell of a bumpy ride. Also on the cast is Geoff Stults (TV’s Zoo), young actress Isabella Rice (True Blood), Simon Kassianides (TV’s Agents of S.H.I.E.L.D.), Whitney Cummings (The Wedding Ringer), Robert Wisdom (TV’s Chicago PD) and film and television star Cheryl Ladd.

UNFORGETTABLE IS RELEASED IN UK CINEMAS ON APRIL 21

Heigl stars as Tessa Connover, who is barely coping with the end of her marriage when her ex-husband, David (Stults), becomes happily engaged to Julia Banks (Dawson)—not only bringing Julia into the home they once shared but also into the life of their daughter, Lilly (Isabella Rice).  Trying to settle into her new role as a wife and a stepmother, Julia believes she has finally met the man of her dreams, the man who can help her put her own troubled past behind her.  But Tessa’s jealousy soon takes a pathological turn until she will stop at nothing to turn Julia’s dream into her ultimate nightmare.