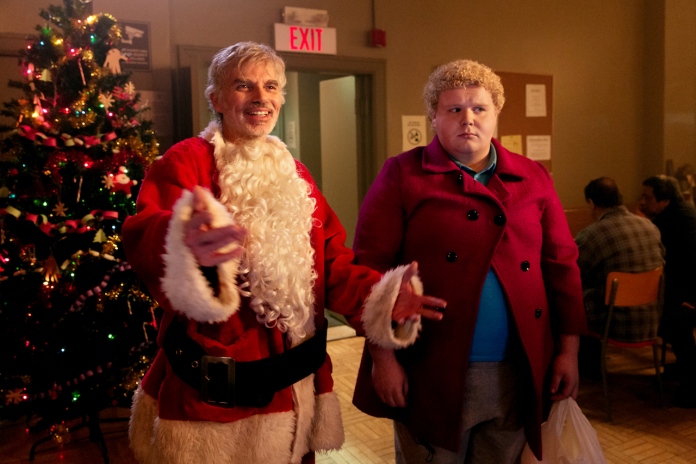 13 years ago the Christmas movie genre was turned on its head by Bad Santa. A subversive, anti-festive movie that thrived in its commitment to lewd vulgarity. Now comes a sequel, and while there’s no denying the quality of writing is of a similar standard to the cult-favourite production, given we’ve seen it before the film has lost that imperative shock value, which is what made it such a unique piece of cinema. Now, Mark Waters (taking over the helm from Terry Zwigoff) knows exactly what worked the first time around, and is seeking to do it all over again, but without that element of surprise the flaws appear, and they’re hard to shake off.

Billy Bob Thornton returns as Willie Soke, adorning the Santa outfit yet again, this time when vying to get his grubby paws on the two million dollars tucked away in the safe of a charity organisation. The idea came to him from his former associate Marcus Skidmore (Tony Cox), who prepares the entire endeavour, but there’s a surprise in store – for the inelegant pair have a third accomplice in the form of Sunny Soke (Kathy Bates) – Willie’s equally as offensive mother. The plan is to manipulate Diane Hastings (Christina Hendricks) and then strike, stealing the money and finally adding a purpose to their anger-induced lives. But when dealing with such boisterous, self-serving individuals, there’s no saying whatsoever this plan is going to come together.

In a bid to better the preceding production, Bad Santa 2 is vying too hard to out-shock what came before, and in doing so feels horrendously contrived. There are some beautifully offensive, indelible slurs that come out of the dirty mouths of our protagonists, insults you’d have to wash your mouth out with soup after projecting, which while remaining faithful to the brand, feel too forced in their implementation, appearing to be said just for the sake of it. This can often be the problem with sequels to cult movies (see Zoolander 2) – what made it so popular in the first place was that people weren’t expecting it to be so good. With a sequel comes the supposed benefit of knowing exactly what audiences responded too so fervently, but this can also be detrimental, as the inclination to appease that same crowd and attempt to emulate what worked in the past so rarely breeds the same results.

But that being said, there are several moments in the film that will have the audience in stitches, gasping in shock at some of the material, while the unapologetic nature of the film’s perpetually destructible protagonist is glorious. But somehow, and to the filmmaker’s credit, yet again we manage to inject a very slight amount of sincerity into proceedings. Just like the first, though crass and irreverent for the best part, when an element of heart and pathos is required towards the latter stages, it’s done so in a triumphant manner – and that is far from an easy task.