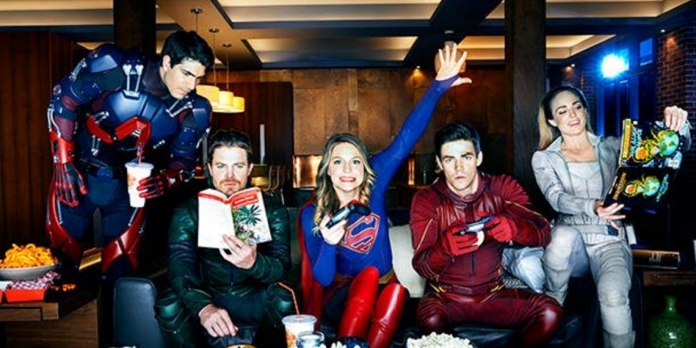 Over the past couple of years, we’ve been lucky enough to enjoy crossover episodes between Arrow and The Flash. However, with Legends of Tomorrow and Supergirl now on The CW, they’re planning a four night epic crossover event teaming up all the heroes next month.

What could bring all of these DC Comics icons together? Well, they’ll be squaring off against alien invaders known as the Dominators. They want to harvest Earth’s metahumans in order to create their own, and that’s something which will lead to characters from the worlds of the shows listed above coming together (some for the first time) in order to take them down.

Not much is known about the event as of right now, but we do know that Arrow’s 100th episode – which will serve as part three – is going to bring back several familiar faces.

More details will probably be revealed about what’s to comer over the next few weeks, but for now, we have the first official images from the event. As you can see by clicking through the gallery below, heroes like the Green Arrow, Supergirl, Vixen, and Citizen Steel are standing side by side for the first time. Stephen Amell, Grant Gustin, and Melissa Benoist have also taken part in a fun photoshoot which brings together the network’s heroes.