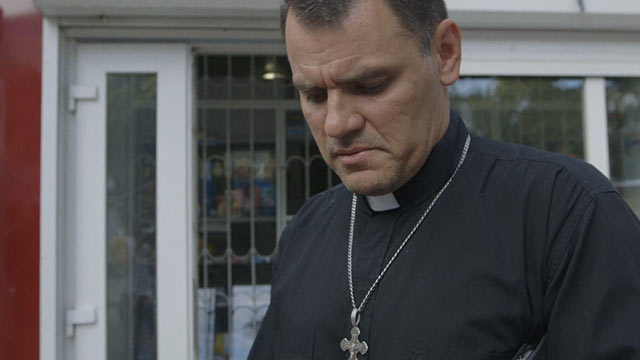 Heavily one-sided but stirring all the same, this eye-opening documentary explores the compelling story of square-jawed crusader Gennadiy Mokhnenko. Part pastor and part vigilante, he’s on a mission to tackle the epidemic of drug-addicted street kids that plagues parts of Ukraine. Scores of children are being abused, ignored and forgotten, and Mokhnenko has taken it upon himself – in the face of government incompetence and neglect – to act.

Night after night he loads up a minivan and goes searching for the vulnerable souls who have fallen victim to addiction. He finds them huddled together – track marks all over their emaciated bodies – on street corners, in make-shift, detritus-strewn shacks and even in sewers. From here they’re taken – sometimes against their will – to Pilgrim Republic, a rehabilitation facility set up in the industrial city of Mariupol back in 2000.

Goal number one is obviously to get them clean, but Mokhnenko’s commitment to the cause goes further. As well as being a rehab centre Pilgrim Republic serves as a hostel, a school and, in some cases, a home. Ideally these kids would be reunited with loved ones, yet all too often their families either aren’t around or are part of the problem. Mokhnenko – also known as Crocodile Gennadiy due to a Soviet cartoon character who shares his name and charitable instincts – has adopted many as his own.

For director Steve Hoover (Blood Brother) Crocodile Gennadiy is quite clearly a hero, an unmistakeable force for good. Questions remain, though. Who or what gives him the authority to decide what’s best for those he helps and – if needs be – force them to change their ways? We see children separated from their mothers, wives separated from their husbands and people essentially kept as prisoners. Some are rounded up and returned to Pilgrim Republic time and time again.

With life and death at stake Mokhnenko simply says he is doing what is necessary – “I don’t need permission to do good deeds.” He sees it as his religious duty to care for and protect the innocent, even it’s from them themselves. It’s certainly hard to argue with the results and – for the most part – his harsher methods come across as justifiable tough love. Still, there are times when Hoover is too quick to move on as doubts arise. He’s constantly hurrying onwards to the next good deed.

At one stage his subject is shown reading the criticism section of his own Wikipedia page and chewing over the suggestion that he’s driven by ego as much as altruism. Perhaps this isn’t entirely wide of the mark. Snippets of grandstanding on-air speeches point to man who’s both media savvy and aware of his own charisma, but Hoover isn’t interested in dissenting voices. For him Mokhnenko’s work speaks for itself, motivations are irrelevant. He’s probably right.