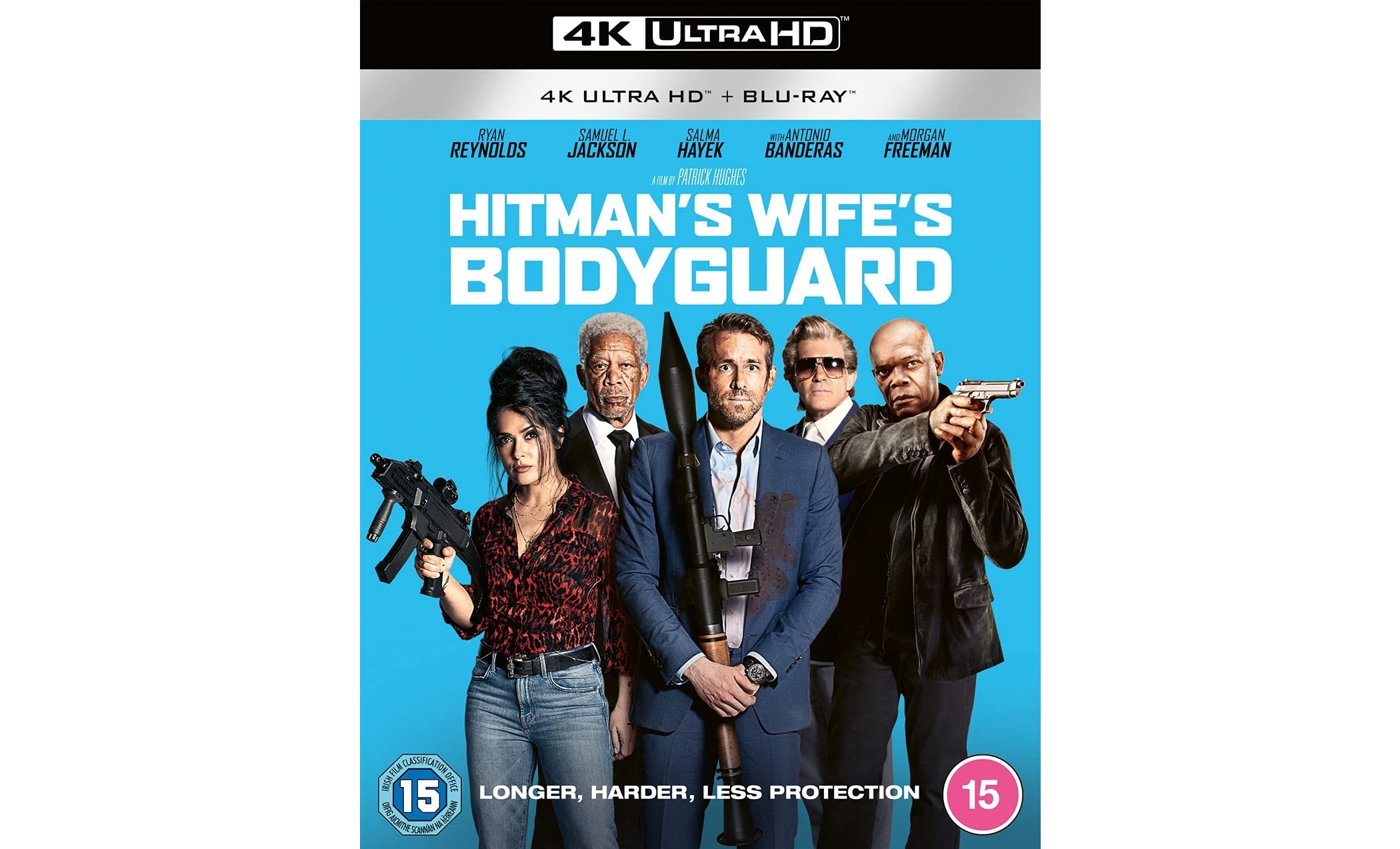 The Hitman’s Wife’s Bodyguard is out on digital, DVD, Blu-ray and 4K UHD now and to celebrate we’re giving away three 4K UHD’s to three lucky winners!

Still unlicensed and under scrutiny, Bryce is forced into action by Darius’s even more volatile wife, the infamous international con artist Sonia Kincaid (Salma Hayek). As Bryce is driven over the edge by his two most dangerous protectees, the trio get in over their heads in a global plot and soon find that they are all that stand between Europe and a vengeful and powerful madman (Antonio Banderas). Joining in the fun and deadly mayhem is Morgan Freeman as… well, you’ll have to see.

The Hitman’s Wife’s Bodyguard is out on digital, DVD, Blu-ray and 4K UHD now.

Part A– Standard Prize Draw Terms
Entrants who enter via the Rafflecopter on this page are entered for a chance to win The Hitman’s Wife’s Bodyguard on 4K UHD (the “Prize”).

There are three (3) Prizes to be won by three (3) Entrants who follow the Entry Mechanics and are selected at random per clause 13 (the “Winners”). Each Winner will receive one (1) Prize.

1. Promoter: The Promoter is HeyUGuys.

2. Eligibility
(a) To enter this Prize Draw you must be aged 18 years old or over during the Opening and Closing Date;
(b) By entering the Prize Draw, you confirm that you are 18 years old or over. This Prize Draw is not open to:
(i) employees of the Promoter or its subsidiary companies;
(ii) employees of agents of the Promoter or subsidiary companies, who are professionally connected with the Prize Draw or its administration; or
(iii) members of the immediate families or households of (i) and (ii) above.
(c) The Promoter will not accept and will not count Prize Draw entries that are:
(i) automatically generated by a computer (including systems which can be programmed to vote) or by macros;
(ii) completed by third parties or in bulk;
(iii) illegible, altered, reconstructed, forged or tampered with; or
(iv) incomplete.
(d) Entries on behalf of another person will not be accepted and joint submissions are not allowed.
(e) By entering the Prize Draw, you confirm that you are eligible to do so and eligible to claim any Prize you may win. The Promoter may require you to provide proof that you are eligible to enter the Prize Draw and if you cannot, you may be disqualified from the Prize Draw.
(f) If it becomes apparent that a participant is using a computer(s) to circumvent the condition in (2)(b)(i), for example by masking their identity by manipulating IP addresses, using identities other than their own or any other automated means in order to participate in the Prize Draw, that participant will be disqualified and any Prize awarded will be void.

6. Promoter’s Rights
(a) If the Promoter reasonably believes you have breached these Terms and Conditions, the Promoter may exclude you from participating in the Prize Draw. (b) The Promoter reserves the right, at its sole discretion, to hold void, suspend or withdraw, the Prize Draw at any time, where it becomes necessary to do so as a result of events outside of its control.

7. Limitation of Liability
(a) The Promoter and the Supplier accept no responsibility for withdrawal of the Prize Draw, system errors or other issues that may result in disruption to lost, delayed or not received entries or Winner notifications that are the result of events outside of the Promoter’s control.
(b) The Promoter or its agents or the Supplier will not be responsible for the non-inclusion of entries as a result of technical malfunction, systems, network, server, computer hardware or software failures or otherwise.
(c) The Promoter and the Supplier shall not be responsible or liable for any printing or typographical errors in any materials associated with the Prize Draw.
(d) Insofar as is permitted by law, the Supplier, the Promoter, its agents or distributors will not in any circumstances be responsible or liable to compensate the Winner(s) or accept any liability for any loss, damage, personal injury or death occurring as a result of taking up the Prize except where it is caused by the fault of the Supplier, the Promoter, its agents or distributors or that of their employees.

8. Contact
For help with entries or any questions relating to the Prize Draw please send all communications via https://www.heyuguys.com/contact-us/

9. Governing law
These Terms and Conditions shall be governed under the laws of England and Wales. Any dispute arising from, or related to, your use of the service shall be subject to the non-exclusive jurisdiction of the courts of England.

10. Additional eligibility criteria
This Prize Draw is open to Entrants who are residents in the UK only. All Entrants must be 18 years old or over.

11. Entry Mechanics
(a) Entry is via Rafflecopter only.
(b) The Prize Draw will run from 10.30 GMT on 10th September 2021 (the “Opening Date”) to 23.59 GMT on 23rd September 2021 (the “Closing Date”) inclusive.
(c) All Prize Draw entries must be received by the Promoter by no later than the Closing Date. All Prize Draw entries received after the Closing Date are automatically disqualified.
(d) To enter the Prize Draw, you must enter via the Rafflecopter widget (posted at 10.30 GMT on 10th September 2021).
(e) Incomplete or invalid entries will not be entered into the Prize Draw.
(f) No purchase necessary; however internet connection is required.
(g) Only one entry per person is permitted.
12. The Prize
(a) There are three (3) Prizes to be won by three (3) Entrants who follow the Entry Mechanics as outlined above and are selected at random per clause 13 (the “Winner(s)”) The Prize is The Hitman’s Wife’s Bodyguard 4K UHD.
(Promoter will not deliver to any address outside the United Kingdom).
(b) The Prize consists only of the elements expressly set forth above.
(c) There is no cash alternative for the Prize. All elements of the Prize must be taken at the same time. If the Winner(s) elects not to partake in any or all portions of the Prize, any remainder of the Prize will be forfeited and shall not be subject to further or alternative compensation. The Prize may not be sold, offered for sale or used in connection with any other Prize Draw or promotion by the Winner(s). The Promoter’s decision is final and the Promoter reserves the right not to correspond on any matter.
(d) The Prize will be supplied by and on behalf of Lionsgate of 45 Mortimer Street, London, W1W 8HJ (the “Supplier”). The Promoter reserves the right to replace the Prize with alternative Prize of equal or greater value if circumstances beyond the Promoter’s control make it necessary to do so.
(e) The Prize is not negotiable or transferable.

14. Claiming the Prize
(a) The Winner(s) will be contacted by the email provided on entry within five (5) calendar days after the Closing Date.
(b) The Promoter will make all reasonable efforts to contact the Winner(s). If the Winner(s) cannot be contacted or is/are not available or has not claimed their Prize within seven (7) calendar days of the Closing Date (the “Prize Draw Period”), the Promoter reserves the right to offer the Prize to the next eligible Entrant(s) selected in the same manner (a “Reserve Winner”).
(c) The Prize may not be claimed by a third party on your behalf.
(d) The Promoter does not accept any responsibility if you are not able to take up the Prize.
(e) Any unclaimed Prize shall remain the property of the Supplier.

15. Force Majeure
In the event that the Promoter and/or Supplier is prevented from performing, or is unable to perform any of its obligations under these Terms and Conditions due to any act of God, fire, casualty, flood, war, strike, lock out, failure of public utilities, injunction or any act, exercise, assertion or requirement of any governmental authority, epidemic, or pandemic, destruction of production facilities, insurrection or any other cause beyond the reasonable control of the party invoking this provision, and if such party shall have used reasonable efforts to avoid such occurrence and minimise its duration and has given prompt written notice to the other party, then the affected party’s failure to perform shall be excused and the time for such performance shall be extended for the period of delay or inability to perform due to such occurrence. For the avoidance of doubt the Prize will be delivered once the Promoter and/or Supplier are able to access and send out the Prize, in accordance with UK government policies around Coronavirus (COVID-19).
The usual T&Cs can be found here. Good Luck!