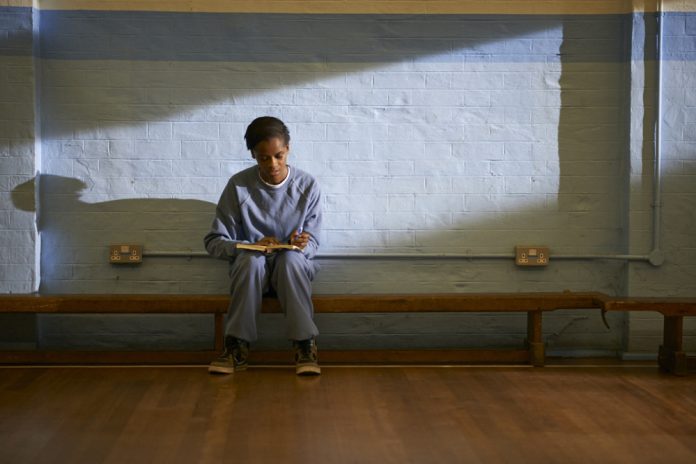 Michael Caton-Jones has made some awful films of late. With that in mind, and the background setting of the 2011 riots teeing up this movie, you could well be forgiven for passing up the chance to see this modest British indie. But whatever you do, don’t let initial concerns put you off. Urban Hymn is a beautiful, highly-charged slice of UK cinema that simultaneously harks back to the kitchen sink dramas of yesteryear, whilst maintaining a contemporary message it serenades you with.

Kate (Shirley Henderson) is an experienced sociology lecturer who wants to be on the front-line, as a care worker for troubled youths. Finding work in a care home in London, she finds her gentle approach falling on deaf ears. Two trouble-makers, who we are introduced to in the opening credits causing mayhem during the riots of 2011, are particularly immune to Kate’s well-meaning advances. Jamie (Letitia Wright) and her drug-addicted best friend Leanne (Isabella Laughland) are two tearaways who are in and out of prison. As Jamie approaches her 18th birthday she is desperate for a place of her own, but knows that the law will soon take a far less lenient view of her crimes once she is an adult.

Kate manages to spend some time alone with Jamie when Leanne is in prison, and soon they form a close bond that results in the youngster joining a local choir. Leanne is furious on her release, feeling that Kate is meddling and trying to destroy the one steady influence in her life. Jamie has a natural flair for music, but is in danger of throwing away a future that promises much for the sake of her friendship with Leanne. Kate also has a troubled past and is keen not to see talent go to waste.

The plot follows some very conventional beats and there is a hint of wanting to latch onto the riots after the event. The film could even benefit from cutting out the references to these events entirely, they add little and instead imply a more targeted message than is apparent in the film – but don’t let that take away from a truly stunning piece of cinema. Urban Hymn is a masterfully executed dose of reality in the guise of an uplifting drama. It feels real in a way that doesn’t pander to the stereotypes the media usually tries to force upon us. It tells us that not all characters are redeemable, not all ‘saviours’ are selfless and not all lost causes are hopeless.

The use of choir music, from original compositions to spiritual covers, is sublime. It’s not a religious film at all, Kate mentions that she sings for her own reasons, but there is something enriching in the sound of it. Shirley Henderson plays the meek Kate to perfection. She may be small in stature but is every bit the force of nature she needs to be. Her story is heartbreaking. We find out she has lost something precious to her, and her marriage is suffering as a result. The depiction of grief and anguish is unbearably resonant at times, but it all adds to the experience.

Jamie and Leanne are two intriguing characters. We can see early on that Jamie is the softer of the pair, but their bond is forged in respect of one another and fierce loyalty. When Leanne begins to lose her vice-like grip on her friend, we still see something identifiable in the emotions that drive her. The extremes she goes to are horrifying, but they serve a purpose.

Its a hard film to reflect on, so one that deserves to be judged in the moments after the credits begin to roll. Urban Hymn is one of the most beautiful, heartbreaking and tender films of the year. It often hits the high notes perfectly. One of the most memorable cinematic experiences in ages.

Death On The Nile Review