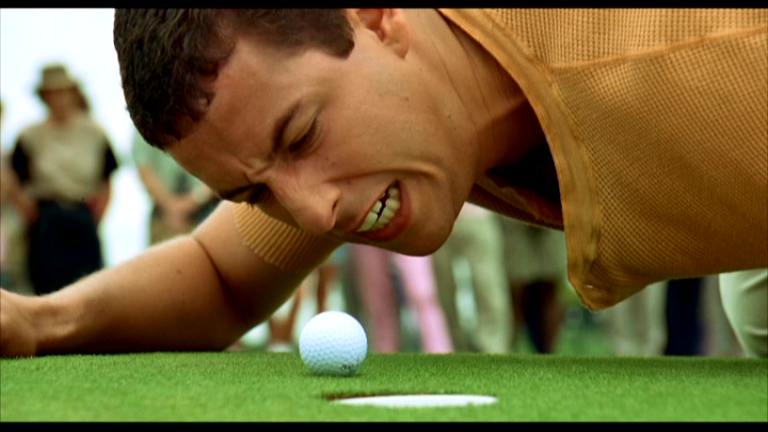 Adam Sandler’s latest movie That’s My Boy hits DVD shelves today and it got me thinking that it was about time we did an Adam Sandler top 10. It’s easy to poke fun at some of his recently movies but I am a rather big fan of his work and thought I’d compile a list of my favourite Sandler movies, many of which I know you’ll love too.

That’s My Boy is released on DVD and Blu-ray today (synopsis below) so have a look at the list below and let me know what you think.

While still in his teens, Donny (Adam Sandler) fathered a son, Todd (Andy Samberg), and raised him as a single parent up until Todd’s 18th birthday. Now, after not seeing each other for years, Todd’s world comes crashing down on the eve of his wedding when an uninvited Donny suddenly shows up. Trying desperately to reconnect with his son, Donny is now forced to deal with the repercussions of his bad parenting skills.

This is obviously open to debate so please feel free to have that debate in the comments section below. Tell us what we missed and why you either agree or disagree with our final 10.

Click gives Sandler a very different role to many of his other movies to engage with. As a father and workaholic architect, he struggles to find his work-life balance, when happenstance unites him with Christopher Walken’s character who gives him a magical remote control which allows him to pause, rewind or fast forward real life.  All is going along nicely until various mishaps occur, and this becomes one of Sandlers more emotional films, actually becoming quite sad and a little depressing.

Fabulous performances from, Sandler, Beckinsale and Hasselholf means that this movie strikes the balace between happiness and sadness, with multiple hilarious moments cleverly woven together with extremely sad ones. Many people don’t like this movie bit I think it is fabulous.

A cheeky highlight is when Sandler pauses time, stands there and farts in the face of the Hoff, re-starts time and Hasselhoff is engulfed! A Showcase of brilliant toilet-humour: very silly but extremely fun!

Mr. Deeds is a classic comedy featuring Sandler as an amateur Hallmark greetings card writer, making money working in a pizza parlour. He receives a huge cash sum (which is a recurring thing in Sandler movies) from his long lost uncle and the comedy unfolds a he enters a world he never dreamed he could have been a part of.

Enter Supporting roles of Winona Ryder and John Turturro, Ryder playing the double agent reporter girlfriend, and Tuturro the hilarious butler with a dead, black foot. He is ever so “very sneaky”. Brilliant.

Feel good comedy, one of the faves in our top ten!

Sandler benefited from a decent cast, a fun soundtrack and, in director Michael Lehmann, a director who knew how to take a concept which could have fallen flat on its face and inject a dark streak of black comedy into the mix.

Brendan Fraser and Steve Buscemi joined Sandler as members of the fledgling rock outfit The Lone Rangers who storm Rebel Radio in order to get their demo tape played on air and then hopefully a record deal. Things go awry of  course and Sandler’s a lot of fun here, particularly as one of a trio of lead actors.

It’s not a great film, but it does have a strong following and given what has happened to the music industry in the nineteen years since the film opened the film is almost quaint in its portrayal of small time fame at any cost.

The Waterboy is completely stupid from start to finish and I love it! It tells the silly story of a simple man, Robert ‘Bobby’ Boucher Jr. (Sandler) who grows up in a swamp with his mama (Kathy Bates) who is shut off from all things in the real world. His father left when he was a baby and all he really knows is how to prepare the perfect glass of water “Now that’s quality H2O!”.

Picked on and bullied by the team at the highly professional college, he’s forced to go to a lesser team helmed by Coach Klein (Henry Winkler). It’s only when his inner rage comes out that they realise they have a weapon on their hands and the team begins to prosper.

Sandler plays this role brilliantly maintaining the lovable ‘Bobby’ Boucher from start to finish. Casting Bates was a stroke of genius and the scenes with her and Sandler are priceless, bouncing off one another and at every given opportunity. The poo really starts to hit the fan when Bobby gets a girlfriend Vicki Vellencourt (Fairuza Balk) much to his mother’s disapproval as all women are, according to her are ‘the devil’!

Yet again this movie will have you laughing and crying and you’ll be routing for Booby Boucher all the way! Bravo Mr. Sandler!

A man that plays golf like he’s playing hockey! What’s not to like!? Happy Gilmore tells that exact story where a rejected ice-hockey player  who, in a bid to save his grandmother’s house, decides to become a pro golfer and beat the man with the greatest acting name of all time ‘Shooter McGavin’ (Christopher McDonald) in a pro tournament.

If that’s not enough to whet your appetite, he’s trained to play golf by a one handed Carl Weathers (he lost his hand to a crocodile?!) and it also co-stars Richard Kiel (Jaws from James Bond) as the guy on the sideline who shouts every time Shooter tries to take a shot.

Yet again a silly movie which will make you laugh from start to finish. The loveable yet angry Adam Sandler is on top form in this fun movie along with pretty much everyone else.