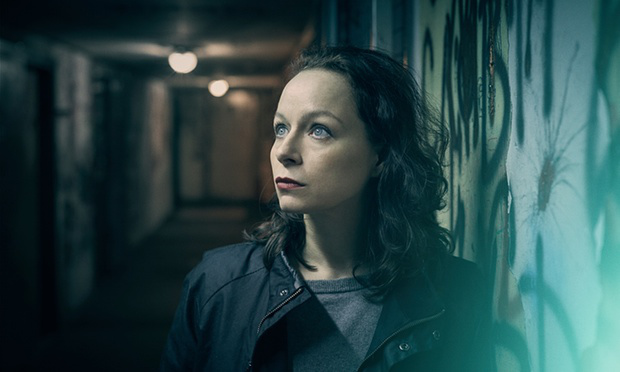 From the word go, or should we say, from the heart-pumping heist of an opening act – the latest series to hit Sky Atlantic has quickly and quiet efficiently at that, undoubtedly become one of 2015’s best crime dramas. One might say that Sky were taking a risk airing and indeed financing a show that is 90% subtitled, albeit this is pan-European stance is thoroughly refreshing and certainly doesn’t withdraw from the drama we see before us.

As we are launched into this mini-series with an intriguing near seven minute jewellery heist (to the boom of Bowie no less); little do we know that the diamonds these criminals now possess are simply secondary to the gritty gang infused war tale that’s in store. It swiftly becomes apparent this story is split into three distinct sides consisting of the English, French and Eastern European – creating an effortlessly formed equilateral. Bouncing from one angle to the next, writer Jack Thorne (This is England, The Fades) doesn’t sugarcoat anything, fuelling our desire to know everything about the so called Panthers (that have tigers tattooed on their chests). Sent by her plum Brit of a boss Tom (John Hurt), independent claims specialist Naomi (Samantha Morton) is on a mission to solve the case of the missing diamonds from Marseille, yet it seems she has bitten off more than can she chew.

As this series of intertwined events unfold, it seems Naomi is not alone when it comes to tracking down these stolen goods. Police officer Khail (Tahar Rahim) throws himself into this case; resulting in many evenings spent falling collapsing on his mother’s couch and neglecting how society has well and truly corrupted his feisty little brother. Very much at the heart of this is criminal Panther Milan, better known as ‘The Animal’ to his peers. A name he very much wants to be forgotten about but sticks like glue and with good reason.  As the universe pulls these three very different sides together, shadowy figures emerge from the depths as well as truths they are all desperately trying to bury.

Skilfully written and paced carefully, The Last Panthers allows room for perfectly flawed characters. On the surface, specialist Naomi becomes somewhat clouded by her desire to seek out the truth, that her actions once calculated are nothing other than erratic and desperate, in turn allowing Morton to shine in this cross between The Killing’s ‘Linden’ and Spooks’ ‘Ros’.

Even though this is only a six-parter there is ample amount of time to deliver one hell of a solid back-story on all fronts. The old ‘don’t judge a book by its cover’ phrase comes bouncing out of the wood work as by the third chapter you find yourself rooting for the bad guys as well as franticly seeking the truth above all else as our resilient female lead does. A distinct equilibrium is created allowing room to see both sides of spectrum and decide for ourselves who we want to come out on top, never mind what the creators have in store for us. At times some scenes become convoluted and flashbacks become muddled with the present day, however this just a minor setback in an otherwise on point, engaging and fresh take on the infamous story of the Balkan jewelry thieves – Pink Panthers.

Series director Johan Renck delivers us quiet the finale tying everything into a neat bow leaving just enough string out for our thoughts to be lingering in the diamond smuggling war torn world of The Last Panthers.

Catch The Last Panthers on Sky Atlantic, Thursday’s 9pm – and check out an EXCLUSIVE behind-the-scenes clip below (warning – may contain spoilers).