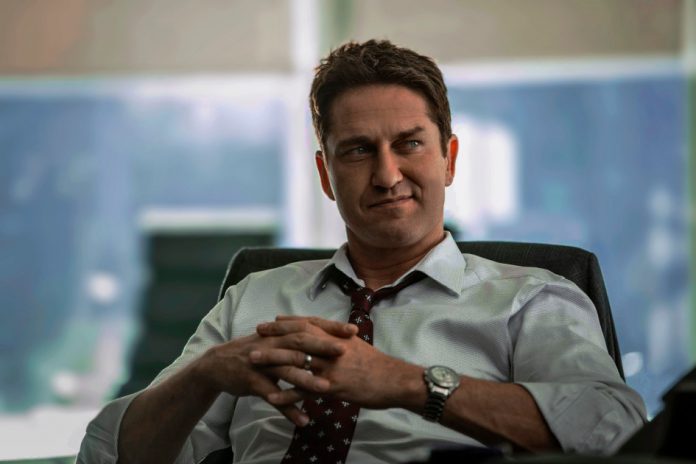 Gerard Butler plays a bit of a dick in Mark Williams directorial debut The Headhunter’s Calling, and then his son gets ill and he’s supposed to realise he’s been a bit of a dick, and then the audience are supposed to forgive him for being a bit of a dick. If you don’t abide by the narrative, and invest emotionally and have this dramatic change of heart by the close of play, which is undoubtedly expected of the viewer, then the film falls flat and all you’re left with is a lead character who you just think is a bit of a dick – and that’s exactly what transpires.

Butler plays headhunter Dane Jensen, who has the gift of the gab, and is vying for a promotion at his recruitment agency against his colleague Lynn (Alison Brie), after his vile boss (Willem Dafoe) explains he’s likely to leave the company. Obsessed with work, ignoring his wife Elise (Gretchen Mol) apart from when he wants to have sex, while persistently telling his kid Ryan (Max Jenkins) to lose weight, his life is shaken when they discover that his 10-year-old son is diagnosed with cancer. He must now start balancing his professional life with his personal one a little more successfully, having to come to terms with what really matters in life.

Without earning the investment of the viewer after the playful opening act, it makes for a rather tedious second half. That said, and conversely, the tonal shift being so dramatic does reflect reality somewhat, as the film doesn’t need to have a sombre atmosphere from the offset, it’s okay to be irreverent, and explore trivial matters in the workplace, because that’s what we do, we can’t foresee a tragedy happening, and we don’t live anxiously in anticipation of bad news, we just get on with things. That aspect works, but perhaps it goes too far in one direction, appearing almost as a tongue-in-cheek comedy in parts, self-aware and comedically inclined.

That may well be the case, but The Headhunter’s Calling is not nearly as cool as it thinks it is in the opening stages, and while the dialogue is fast-paced, it’s horribly contrived in its execution and not in any way authentic either. Think the lesson that we’ve learnt here is that when the headhunter does call, just don’t pick up.