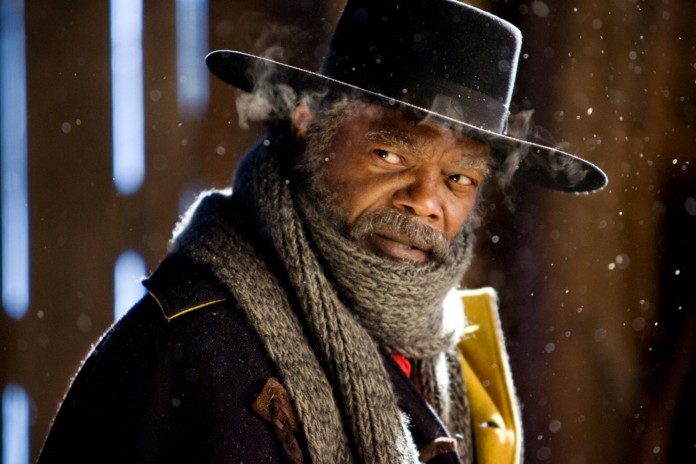 As the evocative, stirring Ennio Morricone overture opens Quentin Tarantino’s eighth endeavour The Hateful Eight, you realise that this is to be quite the cinematic experience, as an ode, of sorts, to classic Hollywood productions. With an intermission breaking up the narrative, and presented on 70mm print, Tarantino is affectionately traditional, providing an ineffably cinematic piece that demands a big screen showing, and provides an antidote to video on demand services. But yet it’s the visuals and technicalities which are the most striking of aspects, and instead the narrative where this title is flawed.

Set in the aftermath of the Civil War, across the unforgiving landscape of a Wyoming winter, we meet bounty hunter John Ruth (Kurt Russell) transporting his challenging prisoner Daisy Domergue (Jennifer Jason Leigh) to Red Rock. Along the way his driver is halted by the presence of fellow bounty hunter Major Marquis Warren (Samuel L. Jackson) who pleads for a ride. Moments later a similar set of events occur, but this time it’s Chris Mannix (Walton Goggins) requesting a seat in their cart, claiming to be the new Sheriff of the town they’re travelling towards.

Along the way they seek refuge from the blizzard in a guesthouse, where fellow lone travellers Oswaldo Mobray (Tim Roth), Bob (Demian Bichir) and Joe Gage (Michael Madsen) are staying, while the seemingly immobile General Sandy Smithers (Bruce Dern) sits pensively on an armchair. Knowing they may have to remain stationed at this shelter for a few days, waiting for the snowstorm to pass, a plot of deception unravels, as suddenly nobody knows quite who they can and can’t trust, while Ruth fervently vies to protect his prisoner, who has a 10 thousand dollar bounty on her head.

The one character not mentioned above (and for good reason), is Channing Tatum’s Jody – an elusive presence who is introduced in the second act. “The name of this game is patience,” he declares – and he’s not wrong either. For this Western gradually picks up pace as we approach the latter stages, where everything kicks brutally into gear. But it can be a struggle reaching this moment of satisfaction, with a tedious middle act where the dialogue is engaging, but the narrative remains somewhat static. Though carrying that idiosyncratic, effortlessly flowing dialogue, with punch and rhythm to it, it does feel contrived in parts, implemented for the sole purpose of sounding cool, rather than driving the story forward.

The primary setting is an intriguing one though, as the way we focus in on this one room, with characters coming in and out, it feels akin to a stage play, adopting tropes of the farce. It’s a bit like Abigail’s Party, but with added rifles. The blizzard outside adds an incredible degree of tension to proceedings too, and makes for an immersive experience, as the harsh howl of the growling wind ramps up the intensity, and also makes you wish you’d packed a scarf to the cinema.

Yet The Hateful Eight is without that one, unbearably suspenseful sequence that has illuminated the last two Tarantino endeavours. In Inglorious Basterds we had the opening scene, and the one in the cellar (THAT’S NOT HOW YOU SPELL THREE WITH YOUR FINGERS FASSBENDER!). In Django Unchained there was the indelible sequence around the dinner table where DiCaprio seeks in exposing his guests – but in this we haven’t got that one moment we can barely watch. And despite the fact that’s hardly something we enjoy sitting through, it’s still something to desire – and this instance, something we’re without.

Win The Lost City on Blu-ray