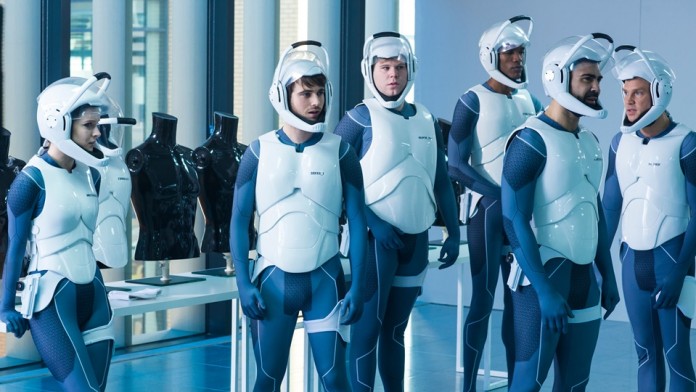 One of the stand-out indie sci-fis on recent years was Caradog James’ Raindance Festival hit The Machine – and the creative mind has now taken on a producing role in another ambitious, above its means thriller – in the form of The Call Up, helmed by first-time director Charles Barker. The resulting production is flawed, certainly, but one that should be commended, as an indicator as to what can be achieved on modest resources, and an inspiration to fellow filmmakers wanting to tackle the genre movie, in spite of the budgetary limitations.

When an online gamer (Max Deacon) awakes to find a card placed by his bed, counting down time with an address printed on the back, he rushes off the mysterious location to discover what/who is calling him. He arrives at the uninhibited, modern building – where a collective of perplexed gamers wait, also having received the anonymous card beckoning them to this elusive setting. Shelley (Morydd Clark), Marco (Tom Benedict Knight), Edward (Ali Cook) and Adam (Douggie McMeekin) are amongst them, where they are instructed to put on motion capture outfits, and technologically advanced helmets which place them inside a video game, in a breathtakingly immersive experience. The computer generated Sergeant (Christopher Obi) turns up giving them instructions – though what’s real and what’s not becomes a challenge to navigate, particularly when it comes to the bullets they are encouraged to fire.

Barker presents this narrative with a minimal back-story, as we dive right into the action, with the opening shot that of our protagonist waking up to the sound of the beeping card on his bedside table. From thereon the viewer, much like the character, are thrown head first into the action with little rhyme nor reason, making for an immersive experience that is fitting of this particular story. However while the sense of ambiguity lingers over proceedings and helps inform the tone and atmosphere of this endeavour, it’s as much a cure as it is a blessing. For the lack of back story creates a lack of focus, and a lack of focus creates a lack of investment on our part – as a film that is increasingly difficult to emotionally connect to. Given the characters find themselves in grave danger, that proves to be somewhat detrimental to proceedings.

The picture is crying out for more variety in the narrative too, becoming formulaic as we progress towards the latter stages. The opening act is strikingly compelling, but the concept needs more edge and variation, as almost the entire production consists of our main characters navigating their way around this building, following the Sergeant’s instructions. Aspects we once marvelled at then become tedious, as this feature is effectively one lengthy scene.

Nonetheless, Barker has studiously lingered over the video game versus reality notion, as so many avid gamers live out these fantasies in front of their television screen, so how they would fare in real life combat makes for an interesting concept. However while he certainly does blur the line between the two, his exact intentions and message he’s posing are difficult to grasp. Still, this film remains more entertaining than Adam Sandler’s Pixels did – and made on a significantly smaller budget.

Tickets for The Call Up can be purchased at this link.

Exclusive: Max Deacon on indie sci-fi The Call Up

A Hologram for the King Review