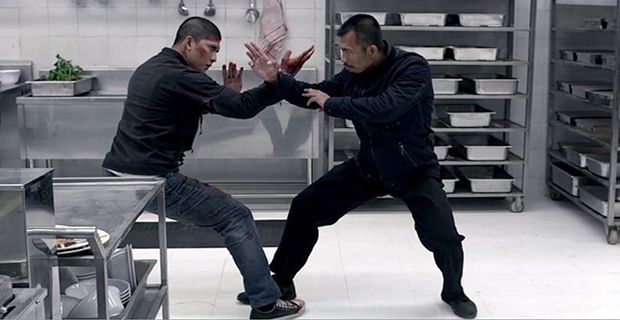 The Raid absolutely tore it up on its release in 2011, with many a jaded film critic blown away by its visceral approach, its inventiveness and in particular (given how well-worn the genre is) its freshness.

Reaction to The Raid 2 shows that Gareth Evans is clearly not a flash in the pan and has talent to spare as a director. Also that star Iko Uwais is that rare commodity indeed; a sensational martial arts exponent with the ability to engage our interest as an actor and to get us to invest in his character. Tony Jaa may well have rocked our world when Ong Bak came out, but Uwais is something else entirely.

Although there is a lot more to The Raid 2 than “pure” martial arts action, with car chases and gun play getting a fair share of the attention too, it remains a martial arts film and to that end, this seems like a good time to remember the very best of the martial arts fights to which we have been treated over the years. Yes, the dojo scene in The Matrix is cool, but it doesn’t come close to the proficiency and expertise on display in this top-drawer half dozen. Enjoy, remember, debate.

Back then, Jackie Chan was churning out films packed full of memorable fight scenes, mostly him taking on a couple of dozen antagonists and relying on boxes, ladders and his wits to at least survive, if not prevail. But here, at the climax of the generally less well-known Wheels on Meals, he squares off against Benny “the Jet” Urquidez in an unusual one on one encounter.

Urquidez cropped up many years later as a hit man on the trail of John Cusack in Grosse Point Blank and was clearly still at that point very much on top of his game. Back in 1983, he was half way through a twenty-year professional fighting career, during which he amassed a 49-1-1 record and the respective abilities of the two fighters is really well displayed here. There are shifts in style (karate, kick-boxing, western boxing), the usual swings of fortune in terms of who is in the ascendancy and a real sense of our notional hero being properly up against it.